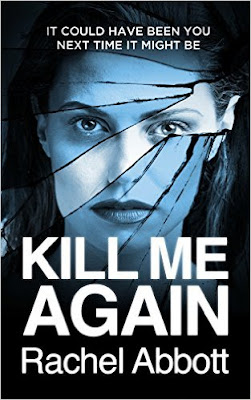 Kill Me Again by Rachel Abbott
Publisher: Black Dot Publishing
Release date: 17 February 2016
Rating: **** and a half
Back cover blurb: When your life is a lie, who can you trust? When Maggie Taylor accepts a new job in Manchester, she is sure it is the right move for her family. The children have settled well although her husband, Duncan, doesn’t appear to be so convinced. But nothing prepares her for the shock of coming home from work one night to find that Duncan has disappeared, leaving their young children alone. His phone is dead, and she has no idea where he has gone, or why. And then she discovers she’s not the only one looking for him. When a woman who looks just like Maggie is brutally murdered and DCI Tom Douglas is brought in to investigate, Maggie realises how little she knows about Duncan’s past. Is he the man she loves? Who is he running from? She doesn’t have long to decide whether to trust him or betray him. Because one thing has been made clear to Maggie – another woman will die soon, and it might be her.

When the body of a young woman is found, she bears a disturbing resemblance to Tom's ex-girlfriend Leo. The victim has been marked with a distinctive sign, reminding Tom of an unsolved case from twelve years previously.

Back then three blonde girls were targeted presumably due to their likeness to each other, two were murdered, the other lived to tell the horrific tale. The Police hoped that she would be able to identity someone from the meagre list of suspects they had gathered, but no such luck.

Meanwhile back in the present Maggie Taylor is left distraught when her husband Duncan goes missing. Not only is his disappearance completely out of character but he also left their two young children unattended. Maggie knows whatever made Duncan leave is serious.

Whilst Maggie is deliberating over whether or not to report her husbands disappearance to the Police, Tom is searching for his ex Leo who as well as being unlucky enough to look like his recently discovered murdered victim, has also seemingly disappeared.

When another body is discovered Tom knows that it is only a matter of time before they have yet another victim in their hands.

Then Maggie Taylor calls to report a stalking incident and everything changes...

Her resemblance to Leo is astonishing but confuses Tom and his team further.

Is Maggie the real murder target or is her resemblance to Leo just a coincidence?

And where on earth is Leo?

Tom's only real certainty is the hope that they find who is responsible for these horrific crimes before they strike again.

Kill Me Again is available from 17 February 2016.
You can pre-order it now from Amazon online.

Thank you to Katie Brown PR who provided me with an advanced copy of this novel in exchange for an honest review.
I am delighted to be taking part in the Kill Me Again blog tour on 21 February 2016 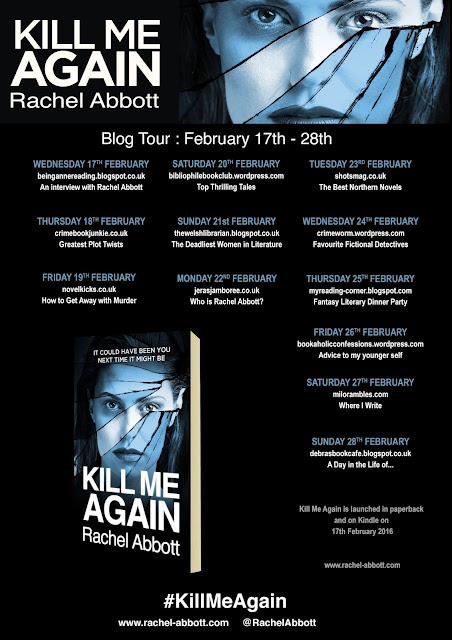