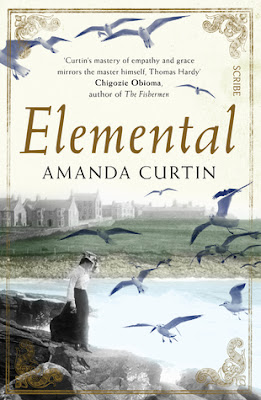 Elemental by Amanda Curtin
Publisher: Scribe UK
Release date: 11 February 2016
Rating: ****
Back cover blurb: It has taken a lifetime for me to see that the more afraid people are of the darkness, the further into it they will flee. Nearing the end of her life, Meggie Tulloch takes up her pen to write a story for her granddaughter. It begins in the first years of the twentieth century, in a place where howling winds spin salt and sleet sucked up from icefloes. A place where lives are ruled by men, and men by the witchy sea. A place where the only thing lower than a girl in the order of things is a clever girl with accursed red hair. A place schooled in keeping secrets. Moving from the north-east of Scotland, to the Shetland Isles, to Fremantle, Australia, Elemental is a novel about the life you make from the life you are given.

Elemental is 'Fish Meggie' 's story, told to her granddaughter Laura, through a series of handwritten notebooks.

Meggie's life starts in Roanhaven, where she is the youngest child in a poor family. Life is tough - the area is dominated by the sea. The sea which is both godlike and witch like in its powers.

Days are long, and unable to help with any manual work Meggie escapes to the world of fiction, aided by her teacher who gives her books to treasure.

When she is deemed to be of age Meggie follows in her sister Kitta's footsteps and leaves Roanhaven to become a 'gutting girl' on the Shetland Isles. The girls are forced to work incredibly long days in poor conditions, covered in blood and guts, cleaning herring to be packed in brine.

Meggie isn't a natural gutting girl, but away from her quiet home life she begins to make friends, including a young boy, a cooper (someone who makes barrels).

Despite vowing never to marry, soon Meggie becomes a wife, and she and her husband emigrate to Freemantle, Western Australia to start a new life.

This new life is tainted by the onset of World War I and Meggie must realise the horrors of War, not least when Magnus returns from the front, a different man to how he went away...

The years that follow are steeped with tragedy until we reach the final part of this beautifully written tale, the Coda; 2011 told from Laura and her daughter in Law Avril's point of view.

Elemental is a wonderfully atmospheric novel that really takes you to the heart of Meggie and her life. It will stay with me a very long time. 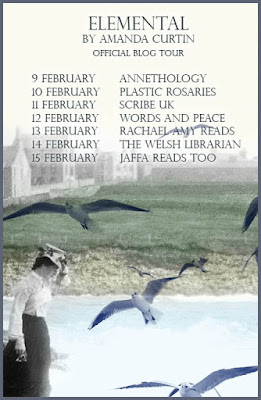