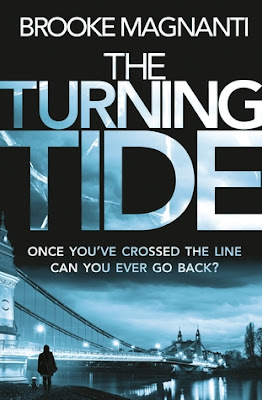 The Turning Tide by Brooke Magnanti
Publisher: Orion
Release date: 25 February 2016
Rating: ***
Back cover blurb: Erykah Macdonald has a nice life-the kind of life you're meant to want. But on her twentieth wedding anniversary, she's about to cross a line. Several hundred miles away in the shallow waters of a Hebridean island, a body is found. It's been in the water long enough to make identification tricky but it's clear this is no accidental death. Erykah knows she's about to make a choice you can't reverse - but she's lived with secrets most of her life - she thinks she's ready. The trouble is, there are far worse secrets than her own about to emerge. From the gurney of a morgue in the Highlands, to the media circus of the national press, and from the seemingly calm suburbs of London to the powerplays in Westminster, a net is tightening. And those that find themselves caught in are willing to kill to get out with reputations intact. Erykah must work out what she's capable of if she's going to keep her head above water-she must leave behind her comfortable life and start breaking rules. She knows she should be scared...but sometimes, stepping over the line is the first step to freedom...

The Turning Tide is an intriguing novel, a mixture of politics, crime and hidden secrets. Throw in a body and a surprise lottery win and you have the recipe for a great story.

Erykah Macdonald is on the verge of leaving her husband when he drops a bombshell that could see both of their lives change forever.

Perhaps just not in the way that either of them were anticipating...

Erykah has had a tough life, her past before meeting her husband was troubled. But that is nothing compared to the trouble that her husband has now found himself in.

Drawn into a situation that she can see no easy way out of Erykah begins to work with some less than desirable characters in order that they leave her and husband alone once and for all.

But the problem with some criminals is that they are merely the monkeys and the organ grinders are far more dangerous than you ever could imagine.

As Erykah becomes more involved in a world that she knows next to nothing about, the danger increases.

Can she stop it all before someone gets seriously hurt?

Or is she already too late?

The Turning Tide is available from 25 February 2016.
You can pre-order it now from Amazon online and Orion.

Many thanks to the publisher who gifted me with a copy of this novel!