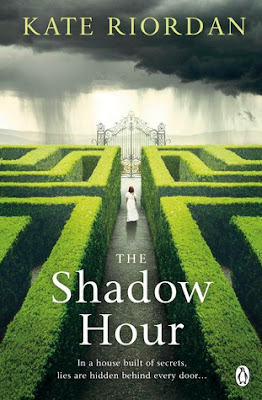 The Shadow Hour by Kate Riordan
Publisher: Penguin - Michael Joseph
Release date: 25 February 2016
Rating: ****
Back cover blurb: Nineteen twenty-two. Grace has been sent to the stately and crumbling Fenix House to follow in her grandmother's footsteps as a governess. But when she meets the house's inhabitants, people who she had only previously heard of in stories, the cracks in her grandmother's tale begin to show. Secrets appear to live in the house's very walls and everybody is resolutely protecting their own. Why has she been sent here? Why did her grandmother leave after just one summer? And as the past collides with the present, can Grace unravel these secrets and discover who her grandmother, and who she, really is?

I loved Kate Riordan's first novel the Girl in the Photograph, so I was thrilled to be able to read the Shadow Hour pre-publication.

The author has such a wonderful way with words, and as regular readers of my blog will know, I am a big historical fiction fan (and not necessarily always easy to please!)

Fenix house has seen better days when Grace Fairford arrives from Bristol to take up the position of governess recently advertised in the press. Harriet Jenner, Grace's grandmother worked at Fenix house decades before and told Grace such wonderful stories that she felt drawn towards the position.

When the child allegedly in Grace's care is unavailable to meet on her first day, she doesn't think too much about it , but as the days draw on and there is still no sign of Lucas, Grace begins to wonder if she shouldn't just leave.

But then she meets Lucas, and her Grandmother's letters start to arrive, and Grace begins to realise that there is a lot more to Fenix house than first meets the eye...

Told both from Grace's and Harriet's (retrospective) points of view, the Shadow Hour is a beautifully written, very atmospheric novel and I very much look forward to the authors next.

The Shadow Hour is available from 25 February 2016.
You can pre-order it now via Amazon online.