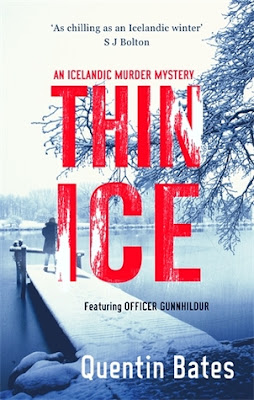 Back cover blurb: Snowed in with a couple of psychopaths for the winter... When two small-time crooks rob Reykjavik's premier drugs dealer, hoping for a quick escape to the sun, their plans start to unravel after their getaway driver fails to show. Tensions mount between the pair and the two women they have grabbed as hostages when they find themselves holed upcountry in an isolated hotel that has been mothballed for the season. Back in the capital, Gunnhildur, Eiríkur and Helgi find themselves at a dead end investigating what appear to be the unrelated disappearance of a mother, her daughter and their car during a day's shopping, and the death of a thief in a house fire. Gunna and her team are faced with a set of riddles but as more people are quizzed it begins to emerge that all these unrelated incidents are in fact linked. And at the same time, two increasingly desperate lowlifes have no choice but to make some big decisions on how to get rid of their accidental hostages...


Thin Ice is the Fifth novel in Quentin Bates' Officer Gunnhildur series and the first that I have had the pleasure of reading.

Ossi and Magni are on the run without a getaway car when they decide to carjack a Mother and her Daughter. But rather than killling the pair, they decide to bring them along for the ride.

On the run not only from the law, but also from the criminal that they stole money from, Ossi and Magni are desperate.

When they discover a hotel closed and abandoned for the winter, they quickly make themselves at home with their hostages, who are well aware that one single move could leave them dead.

Knowing that the paid will be missed, Ossi and Magni must decide what do with their hostages before time runs out for all of them.

Thin Ice is full of loveable characters - although I'm pretty sure that some of them are not supposed to be!

It's ending surprised me somewhat but only added to my overall enjoyment of the novel!


Thin Ice is available from 3 March 2016.
You can pre-order it now via Amazon online. 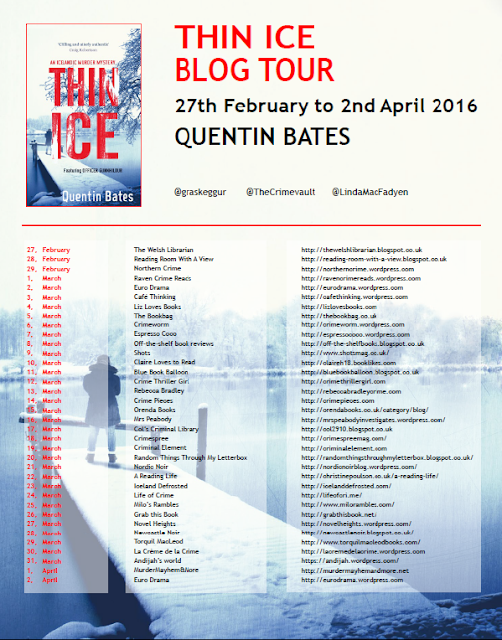 Thanks also to Linda MacFayden for coordinating the mammoth blog tour!