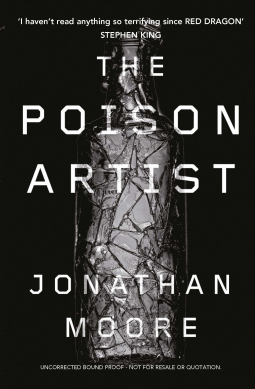 The Poison Artist by Jonathan Moore
Publisher: Orion
Release date: 10 March 2016
Rating: *** and a half
Back cover blurb: Dr. Caleb Maddox is a crack San Francisco toxicologist leading a ground-breaking study of the human pain threshold based on minute analysis of chemical markers. He has also just broken up with his artist girlfriend after she discovered a shocking family secret in his past. Seeking solace, Caleb finds a dark, old-fashioned saloon called House of Shields, and is mesmerized when a beautiful woman materializes out of the shadows, dressed like a 1940s movie star. The enigmatic Emmeline shares a pouring of absinthe with him, brushes his arm and vanishes. As he pursues her through the brooding, night-time city, desperate to see her again, he simultaneously becomes entangled in a serial murder investigation that has the police stymied - men gone missing, fished out of the bay, with no clue as to how they met their end - until Caleb's analysis of the chemical markers in their bodies reveals that each one was tortured to death. Also present are some of the key components of absinthe. As Caleb finally looks forward to a night spent alone with Emmeline, part of his mind wonders if behind the seductive vision is something utterly terrifying...

Caleb Maddox has just broken up his artist girlfriend, naturally as men do, he goes off to drown his sorrows and meets a beautiful yet mysterious woman in a bar.

After a brief whispered conversation, the woman disappears without leaving her name, and soon Caleb is trawling all the bars in San Francisco in a bid to find her.

As a toxicologist Caleb is drawn into the investigation but as his search for the mysterious Emmeline continues, the cops begin to view him in a different light.

The deeper he becomes involved in everything, the more danger he finds himself in until this novel reaches its dramatic climax.

The Poison Artist is a very dark and atmospheric novel which I think would translate well into a movie (not something I usually say about books....)

I've got to be honest, I'm still a little confused by this novels conclusion - but maybe that's what the author was hoping for?!

The Poison Artist is available from 10 March 2016.
You can pre-order it now via Amazon online or Orion.