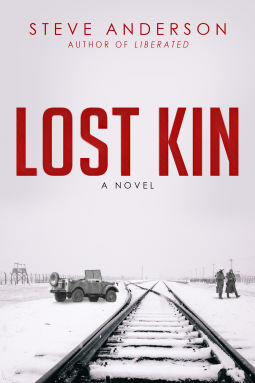 Lost Kin by Steve Anderson
Publisher: Skyhorse/Yucca publishing
Release date: 29 March 2016
Rating: ***
Back cover blurb: Reunited brothers confront a secret Allied betrayal in postwar Munich. Occupied Munich, 1946: Irina, a Cossack refugee, confesses to murdering a GI, but American captain Harry Kaspar doesn’t buy it. As Harry scours the devastated city for the truth, it leads him to his long-lost German brother, Max, who returned to Hitler’s Germany before the war. Max has a questionable past, and he needs Harry for the cause that could redeem him: rescuing Irina’s stranded clan of Cossacks who have been disowned by the Allies and are now being hunted by Soviet death squads—the cold-blooded upshot of a callous postwar policy. As a harsh winter brews, the Soviets close in and the Cold War looms, Harry and Max desperately plan for a risky last-ditch rescue on a remote stretch of the German-Czech border. A mysterious visitor from Max’s darkest days shadows them. Everyone is suspect, including Harry’s lover, Sabine, and Munich detective Hartmut Dietz—both of whom have pledged to help. But before the Kaspar brothers can save the innocent victims of peace, grave secrets and the deep contempt sown during the war threaten to damn them all.

If I'm to be entirely honest, I struggled somewhat with this novel. I don't know if it's because I have only recently read a novel set in the heart of the Second World War though, that was so very different to this.

Lost Kin is set in Berlin immediately after the Second World War. Amid the post-war chaos Captain Harry Kaspar is dragged into a murder investigation. He is pretty sure that the main suspect didn't commit the crime, but it seems that everyone is conspiring against him, in his fight to find out who did.

After being reunited with his actor Brother Max, who fought for the opposite side during the war leaves Harry at first feeling uneasy. Neither Brother is aware just what the other was doing during the war, and this makes them suspicious of each other.

Theirs is a complex relationship, which I wonder if I could have better understood had I read either of the previous novels in the series. But it makes for good reading and makes their story more believable I guess.

I don't want to give too much more away, but this novel is obviously thoroughly researched. Difficult subjects are treated sensitively so as not to appear too dramatic, but at the same time still allowing the brutality of the situation to shine through.

Lost Kin is an enjoyable historical crime thriller, just perhaps not quite the novel that I personally was expecting to read...

Lost Kin is available from 29 March 2016.
You can pre-order it now via Amazon online.

Many thanks to the publisher who gifted me a copy of this novel via netgalley.