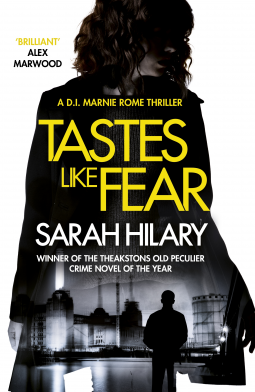 Tastes Like Fear by Sarah Hilary
Publisher:  Headline
Release date: 7 April 2016
Rating: *****
Back cover blurb: Home is where Harm lies...  The young girl who causes the fatal car crash disappears from the scene. A runaway who doesn't want to be found, she only wants to go home. To the one man who understands her. Gives her shelter. Just as he gives shelter to the other lost girls who live in his house. He's the head of her new family. He's Harm. And when Harm's family is threatened, Marnie Rome is about to find out that everything tastes like fear...

Sarah Hillary has done it again. Written a brilliant thriller that keeps you guessing right up until its climax.

The third in Hilary’s Marnie Rome series, Tastes Like Fear could easily be read as a standalone novel. But why would you want to do that when the previous two are so good?

When a young girl crosses the road straight in front of a car, causing a major traffic accident, Marnie and her team are bought in to investigate the possibility that the girl could be one of their missing persons.

May Beswick has been missing for 12 weeks, leaving her parents and younger distraught and fearing the worst. But she isn’t the girl who stepped in front of the car eyewitnesses are sure.

The girl they describe is a walking skeleton, a scared feral creature who may be in danger.

When a young murder victim turns up on their patch, DI Rome and her colleague DS Noah Jake assumes it’s the girl from the accident, but when they turn up and discover May’s body they are immediately struck at the oddness of the crime scene.

Just who and what are they dealing with?

When another body turns up in a very different setting to the one before, the pair are baffled but convinced that they are looking for the same person, despite the differences.

As the traffic accident and the murders become clearly interlinked, the police realise that they may be dealing with something quite different to what they were first anticipating.

Making unpleasant reading at times, Tastes Like Fear may be my favourite Marnie Rome novel so far.

Sarah Hilary knows how to touch on some pretty disturbing subjects with just the right amount of detail. She is fast becoming a master of her craft, and I cannot wait for her next novel.
Tastes Like Fear is available from 7 April 2016.
You can pre-order it now via Amazon online and Headline.