Review: The Teacher by Katerina Diamond 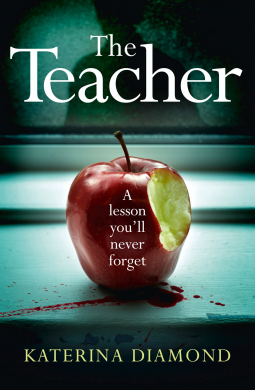 The Teacher by Katerina Diamond
Publisher: Avon Books UK
Release date: 10 March 2016
Rating: *****
Back cover blurb: You think you know who to trust? You think you know the difference between good and evil? You’re wrong... A LESSON YOU WILL NEVER FORGET. The body of the head teacher of an exclusive Devon school is found hanging from the rafters in the assembly hall. Hours earlier he’d received a package, and only he could understand the silent message it conveyed. It meant the end. As Exeter suffers a rising count of gruesome deaths, troubled DS Imogen Grey and DS Adrian Miles must solve the case and make their city safe again. But as they’re drawn into a network of corruption, lies and exploitation, every step brings them closer to grim secrets hidden at the heart of their community. And once they learn what’s motivating this killer, will they truly want to stop him? SMART. GRIPPING. GRUESOME. This is a psychological crime thriller in a class of its own. Warning: Most definitely *not* for the faint-hearted!

The Teacher is the first novel I've read in a while that comes with a warning; that it's not for the faint-hearted.

Of course, being a prolific reader it's very rare that I actually pay attention to these warnings, but if you are not a fan of graphic descriptions of murder scenes and/or torture then it may pay to you take note.

When the body of a head teacher is found hanging from the rafters in the assembly hall of his exclusive school for Boys, it appears to be nothing more than suicide. Only the deceased at that moment in time is aware of the package that he received hours before his death prompting him to fear for his life.

What follows are a series of gruesome murders that at first seem to have absolutely no connection at all, other than their brutality. But a closer look reveals they are connected, but not by the person that DS Adrian Miles' boss is convinced they are.

Investigating officers, DS Adrian Miles and his new partner DS Imogen Grey are thrown together by circumstance, but they work well together, and I would really love to read another novel that features them - I have no idea if this novel is a one off, but it is a partnership that I would definitely read more of.

As more men are murdered and the killings become more high profile and more violent, the urgency on the Police to find the perpetrator intensifies, but then the motive for the killings is discovered and everything changes...

There is so much more that I could say about this novel, but I don't want to spoil it for anyone who is yet to have the pleasure of reading it.

The Teacher is available now from Amazon online and all good book shops.