Blog Tour: All Through the Night by M.P. Wright - Author guest post 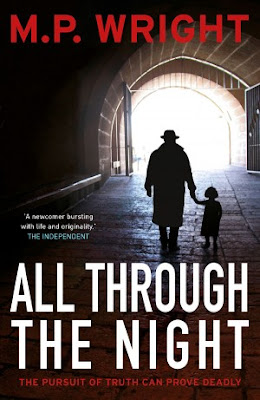 “It’s quite simple Mr Ellington. When you find Fowler, just ask where we can find the truth.” With these words, private detective JT Ellington embarks on a seemingly simple case of tracking down a local GP with a dubious reputation and retrieving a set of stolen documents from him. For Ellington, however, things are rarely straightforward. Dr Fowler is hiding a terrible secret and when he is gunned down outside a Bristol pub, his dying words send JT in pursuit of a truth more disturbing and deadly than he could possibly have imagined.

All Through the Night is published by Black & White publishing and was released on 14 April 2016.

I will be reviewing All Through the Night in a seperate blog post, please keep your eyes peeled for this :)

J T Ellington; Coming Out Of The Shadows

M. P. Wright had his first book, Heartman, published in 2014 by Black & White publishing. Last year Heartman was long listed in the worldwide Crime Writers Association, Ian Fleming Steel Dagger Award. This April the second book in the series, All Through the Night, hits the shelves and is already garnering rave reviews. Mark writes about his characters, influences and the future.

Joseph Tremaine Ellington is certainly a figment of a vivid imagination. Of all the characters in my first book, Heartman, the current one, All Through the Night, and the latest novel, The Restless Coffins, Ellington is the one who cannot be identified as having a single, human person as his inspiration.

The same cannot be said of several other characters, including JT’s cousin Vic, whose aggressive attitude, sense of humour and, dare I say it, somewhat ambivalent attitude to law and order, mirrors my own.

Why is he a black Barbadian immigrant in Bristol? If my book sales matched the number of times I’d been asked that my books would global bestsellers!

The answer is complex and harks back to the books that I first read when I was a teenager and have stayed with me. J. T. Ellington had to be credible, so that involved hours of research. I have spent time in the Caribbean and the southern states of the USA and I have looked into the family histories of many émigrés who travelled to the UK in the 1950’s and 60’s and I was able to build a character that was not just believable, but readers could form a strong emotional bond with.

And the term ‘Bond’ strangely brings us to those amazing authors whose novels set the fire burning within me. I grew up in the arms of James Bond, not the films but the thrillers by Ian Fleming. At the same time I was reading Raymond Chandler, and his Philip Marlowe remains for me the quintessential private detective. In turn Marlowe’s character is reflected in Dashiell Hammett’s Sam Spade.

Ross MacDonald created Lew Archer, a southern Californian detective who can be depressed and world-weary; he is a worn-down and sardonic character who has to wade through the criminal world, and his credibility shouts from the page. In Philip Kerr’s "Berlin Noir" series, German detective Bernhard "Bernie" Gunther exemplifies the grittiness of the sardonic, hard-boiled investigator in a world he’d simply rather not be embedded in.

Perhaps the most direct influence on the creation of J. T. Ellington has been Dave Robicheaux from the books of James Lee Burke. Robicheaux is a Cajun detective. He’s a widower, recovering alcoholic, family man, highly moralistic and he has a vicious temper. His is a flawed, multi-faceted character and at times he can be dangerous, but such unpleasant and, on the face of it, unpopular traits shed an embracing light on the plots and bring the atmosphere of the Deep South to reverberating life.
I’ve never been keen on police procedurals and if I’m truthful rarely read modern crime fiction writers. Friends and colleagues in the crime fiction world write brilliantly about the intricacies of what goes on in police stations and in the relationships between partners serving on the ‘force’, but I do not have the slightest interest in coppers, serial killers or what goes on in a police interview room (I’ve been in to many of those, I can tell ya) or perhaps its because of my own background and my work at the sharp end of probation, risk assessment and dealing with all types of offenders, that I perhaps see it from a different side. There are police characters in Heartman and All Through the Night, but the emphasis is on character rather than their professions.

In the era when my books are set, the late ‘60s and early ‘70s, racism was rife: it was even considered normal in the psyche of most police officers whose first reaction to seeing a West Indian was: ‘they’re up to no good’. In the case of J. T. Ellington, they are picking on the wrong man; with JT’s cousin Vic, they’re probably closer to the truth than they know. Nevertheless that racist train of thought from a serving police officer no-matter what era was abhorrent and I hope my work truly reflects my distain for racism and discrimination in all its forms within the pages of my novels.

I am Leicestershire born and bred. My family were farmers and I went into the music business and ended up training and working in mental health. What possessed me to write a thriller based in Bristol and in an era when I was still in single figures?

Bristol has for hundreds of years had strong links to the Caribbean. It was a centre of the slave trade and in the middle of the last century became a magnet for an influx of West Indian immigrants, many of whom were badly treated, abused and forced into near ghettoes. It is no wonder that resentment grew in cramped, unhygienic living conditions, and where work was available, but of the most menial and lowest-paid kind. Greedy, smug white landlords made a fortune renting out squalid properties to newly arriving immigrants and with little other opportunity for housing those travelling from the West Indies soon found themselves in tatty two-up, two-down damp tenements, sometimes two or more families sharing a makeshift home and making ends meet on poor salaries whilst working their fingers to the bone in low-grade employment.

The city of Bristol struck me as the right place for JT to live. He was with fellow immigrants in a land where everything was alien, forbidding and where the undercurrent of prejudice bubbled up to become a thread running through all aspects of life.

Next year the third Ellington novel, The Restless Coffins will find J. T. travelling back in the Caribbean and to his home of Barbados. The third book in my planned trilogy sees my wily Bajan finally face old ghosts and take on the corrupt police officers and the organised crime lords who pushed him out of his job and off his beloved island home. It’s the fitting denouement to the three stories. Following on the short stories Wendell Patin’s Pork Pie and Standing in The Shadows with the Ghost of Emmett Till. The next ‘big’ projects will be The Holy Bones Blues, which brings my writing back to a Leicester location. As a Leicester lad, that will be an exciting venture for me. 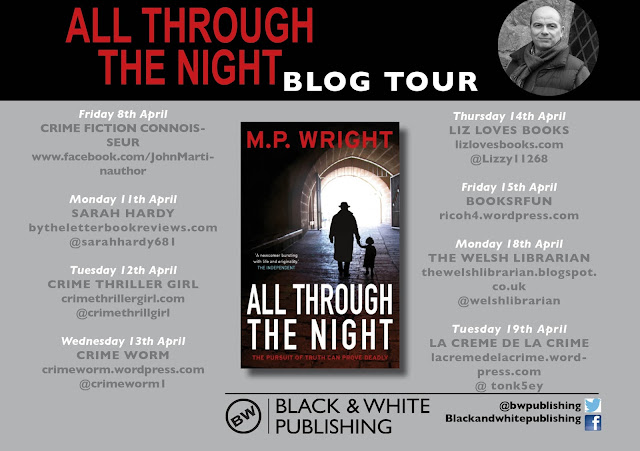 All Through the Night is available to buy now -
via Amazon online and all good book shops.

Many thanks to both the author and publisher for allowing me to be a part of the All Through the Night blog tour.