Review: The Missing by C.L. Taylor 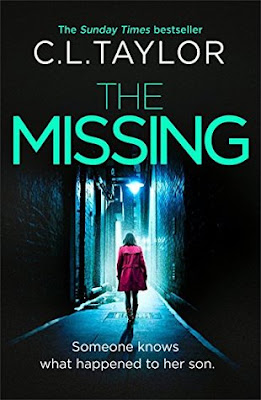 The Missing by C.L. Taylor
Publisher: Avon Books UK
Release date: 7 April 2016
Rating: ****
Back cover blurb: You love your family. They make you feel safe. You trust them. Or do you…? When fifteen-year-old Billy Wilkinson goes missing in the middle of the night, his mother, Claire Wilkinson, blames herself. She's not the only one. There isn't a single member of Billy's family that doesn't feel guilty. But the Wilkinson’s are so used to keeping secrets from one another that it isn't until six months later, after an appeal for information goes horribly wrong, that the truth begins to surface. Claire is sure of two things – that Billy is still alive and that her friends and family had nothing to do with his disappearance. A mother's instinct is never wrong. Or is it?

The Missing is C.L. Taylor's third psychological thriller in as many years and they just continue to get better and better.

Jake her elder son turns to the bottle, her relationship with her husband is breaking down, and Billy is nowhere to be found.

At a press conference to mark the six months since Billy's disappearance, things change within the family dynamic and we truly see the stress that the Wilkinson family is under.

As Billy's Mother, Claire is the strongest voice, but Claire Wilkinson is an unreliable narrator.

Usually these frustrate me, but this time around due to the strength of the writing I was as frustrated as Claire was for the answers, not frustrated with her...

Claire is suffering from brain fugues, or disassociative amnesia, her counsellor and G.P. believe are bought on by extreme stress. And Billy's disappearance is not the only thing causing this stress.

Desperate for answers about Billy's disappearance, Claire beings to visit the old haunts that Billy used to tag as a graffiti artist, certain that somebody knows something.

No one is prepared for the what she discovers and it changes, everything...

The Missing is available to buy now via Amazon online, Avon Books and all good book shops.