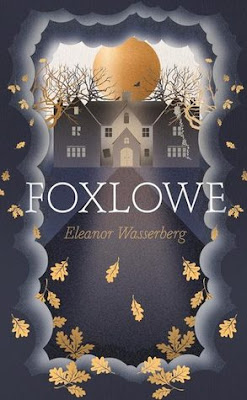 Foxlowe by Eleanor Wasserberg
Publisher: 4th Estate
Release date: 2 June 2016
Rating: *** and a half
Back cover blurb: We were the Family, and Foxlowe was our home. There was me – my name is Green – and my little sister, Blue. There was October, who we called Toby, and Ellensia, Dylan, Liberty, Pet and Egg. There was Richard, of course, who was one of the Founders. And there was Freya. We were the Family, but we weren’t just an ordinary family. We were a new, better kind of family. We didn’t need to go to school, because we had a new, better kind of education. We shared everything. We were close to the ancient way of living and the ancient landscape. We knew the moors, and the standing stones. We celebrated the solstice in the correct way, with honey and fruit and garlands of fresh flowers. We knew the Bad and we knew how to keep it away. And we had Foxlowe, our home. Where we were free. There really was no reason for anyone to want to leave.

The ‘Foxlowe’ of this novel’s title is an ancestral home, and a commune.

‘The Family’ living there are cultish in their actions and living arrangements, centered around the Solstice, and how the sun drives out the dark and ‘the Bad’; the (perceived) evilness that lives inside us all.

‘The Family’ is led by Freya and they live simple, idealistic lives. It consists of ‘Growns’ (Grown-ups) and the ‘Ungrown’ (children).

The ‘ungrown’ are not schooled and free to wander Foxlowe’s grounds as long as they never venture outside the perimeter of the family home.

Green, Toby and Blue are the ‘ungrown’ of the novel, they look out for one another, and all answer to Freya, who can be cruel and violent towards the children.

Green the novel’s protagonist, worships Freya, who could be her Mother – though this is never mentioned.

There is a cruelty and brutality about Foxlowe and ‘the Family’ that is palpable throughout the novel. At first you are not certain why, but then it becomes clear that the adults have made their own decision to live there whilst the children have not.

After a dramatic turn of events that splits Foxlowe entirely, we meet Green outside of Foxlowe, as Jess, where she is struggling to cope with the outside world.

Will she ever learn to adapt?

Will anything ever be the same again?

And can you really leave Foxlowe forever?

Foxlowe is a brilliantly atmospheric novel. Creepy and claustrophic with some deeply flawed characters. It will have you turning its pages frantically wanting to discover its ending which doesn't disappoint.

Foxlowe is available from 2 June 2016.
You can pre-order it now via Amazon online and 4th Estate books.

Many thanks to lovereading.co.uk and the publishers who provided me with an advance copy of this novel in exchange for an honest review.