Review: the Disappearance by Annabel Kantaria 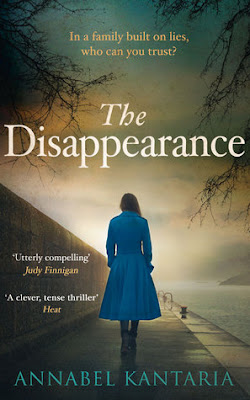 The Disappearance by Annabel Kantaria
Publisher: Mira UK
Release date: 21 April 2016
Rating: *** and a half

Back cover blurb: Audrey Templeton wants to spend her 70th birthday with her children on a once-in-a-lifetime cruise. Neither John or Lexi are overjoyed by a week with their widowed, increasingly forgetful mother, but reluctantly agree. Celebrating at the ship’s famous White Night party, Audrey reveals that although their domineering father left them nothing, when she dies John and Lexi will inherit a life-changing sum. With both children facing financial difficulties, the news is a huge relief. Then Audrey disappears. The search moves from the ship to the Mediterranean Sea beyond, but there is no trace – she has simply vanished. As John and Lexi investigate, clues to their mother’s past emerge – a past in India, of scandal and tragedy – hidden until now. Soon they start to wonder if they ever really knew Audrey, and whether they can trust one another…

Audrey Templeton has disappeared at Sea, leaving her twin son and daughter frantically searching the cruise ship for their missing Mother. The trip was meant to be Audrey's 'last Hurrah' her last big holiday, and a celebration of her 70th Birthday.

From the opening where we learn of Audrey's disappearance, we are then transported back several decades to Audrey on another ship, setting sail for India as a young adult to join one of her best friends who already has a life for herself out there.

Audrey's life is turned upside down when she meets Ralph Templeton, a charming, enigmatic and handsome man. They marry quickly, Audrey seduced by Ralph and the promise of a new life in India, so different from her life in England.

From here on we realise that things may not be quite as they seem.

Back in the present day and Alexandra (or Lexi) and her twin brother John are concerned about their Mother, Audrey. Her behaviour since being in a car crash has been increasingly erratic and John is concerned for her safety. Lexi is of course concerned about their Mother, but thinks John is overreacting and that his plans to put Audrey is some sort of residential care are too much too soon.

This novel is told in alternating parts, mainly from Audrey and Lexi's point of view. From the point that we meet Audrey, setting sail in India until the point that she disappears on the cruise, subtle hints are dropped to the reader about what might have happened.

As Lexi and John learn more and more about their Mother's past each begin to wonder about the other, and whether or not they can be trusted. This novel is by no means a fast paced thriller, but it will keep you guessing and hooked until the end none the less. ﻿

The Disappearance is available from 21 April 2016.
You can pre-order it now via Amazon online.