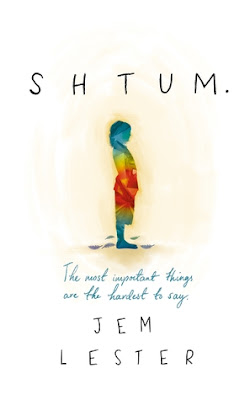 Shtum by Jem Lester
Publisher: Orion
Release date: 7 April 2016
Rating: ****
Back cover blurb: The most important things are the hardest to say. Ben Jewell has hit breaking point. His ten-year-old son Jonah has severe autism and Ben and his wife, Emma, are struggling to cope. When Ben and Emma fake a separation - a strategic decision to further Jonah's case in an upcoming tribunal - Ben and Jonah move in with Georg, Ben's elderly father. In a small house in North London, three generations of men - one who can't talk; two who won't - are thrown together. As Ben battles single fatherhood, a string of well-meaning social workers and his own demons, he learns some difficult home truths. Jonah, blissful in his innocence, becomes the prism through which all the complicated strands of personal identity, family history and misunderstanding are finally untangled. Powerful, darkly funny and heart-breaking, Shtum is a sotry about fathers and sons, autism, and dysfunctional relationships.
I'll be honest, I'm not sure where to start, what I can possibly say about this wonderful novel, that hasn't been said already... but I must try!
Ben Jewell is a broken man, in all senses. He has a drink problem, an employment problem, a marriage problem, and a severely autistic son, Jonah, who the local authorities seem to want to fail.

He and his wife, Emma, desperately need the authorities to rethink their decision regarding Jonah's secondary school placement. When Emma suggests faking a separation, Ben is skeptical, but Emma is convincing and so he and Jonah move in with Ben's elderly father Georg.

To say that Georg and Ben have a difficult relationship would be underplaying the situation slightly, but for me, this is where we really get to the heart of the story as we see these three men, thrown together in a desperate situation, struggling for survival.

Shtum is a fascinating insight in to the struggle that millions of parents must face with their local authorities to ensure that the are getting the best education, help and care possible for their beautiful children.

Jonah is a silent voice throughout much of the novel, but we live him through Ben and Georg, and he is a wonderful, wonderful character enhanced by the love that his father so clearly has for him even in the most exasperating of times.

Shtum at time makes for difficult reading, but its subject matter is tackled sensitively, and its a novel that needs to be on everyone's 'to read' lists this year.

Shtum is available now from Amazon online and all good book shops.