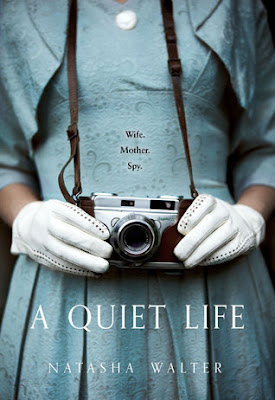 A Quiet Life by Natasha Walter
Publisher: The Borough Press (Harper Collins)
Release date:16 June 2016
Rating: ****
Back cover blurb: Wife. Mother. Spy. A double life is no life at all. Since the disappearance of her husband in 1951, Laura Leverett has been living in limbo with her daughter in Geneva. All others see is her conventional, charming exterior; nobody guesses the secret she is carrying. Her double life began years ago, when she stepped on to the boat which carried her across the Atlantic in 1939. Eager to learn, and eager to love, she found herself suddenly inspired by a young Communist woman she met on the boat. In London she begins to move between two different worlds – from the urbane society of her cousins and their upper class friends, to the anger of those who want to forge a new society. One night at a party she meets a man who seems to her to combine both worlds, but who is hiding a secret bigger than she could ever imagine. Impelled by desire, she finds herself caught up in his hidden life. Love grows, but so do fear and danger. Continued...

Natasha Walter is perhaps better known as the non-fiction author of The New Feminism and Living Dolls. Her first foray into fiction is a beauty and you would not know it is a debut.

The novel opens with us meeting its protagonist, Laura Last, the wife of a missing spy, who has been living with her daughter and (somewhat interfering though well intentioned Mother) in Geneva. To the outside world Laura is nothing but charming, if a little lonely and aloof.

But Laura isn’t as in the dark over her husband’s disappeared as she seems to be, and she carries a huge secret of her own.

Laura’s story begins some years earlier in 1939 when she crossed the Atlantic by boat to live with relations in London, as the second world war gets underway Laura finds herself unable to leave the City and falls in love with Edward Last who she meets at a party one evening.

It soon becomes clear to Laura that Edward is not exactly the man she thought he was, but this only draws her to him more.

Soon Laura is caught up in Edward’s double life and begins some risky work of her own.

In the novel’s end notes Natasha Walter explains that she was inspired (in part) to write this novel by real life’s of the Cambridge spies, in particular the life of Melinda Marling, the wife of Donald Maclean. Donald Maclean defected in 1951 with his fellow spy Guy Burgess, leaving Melinda behind, pregnant with their child.

I look forward to Natasha Walters’ next foray into fiction and really hope it’s another historical epic.

A Quiet Life is available from 16 June 2016.
You can pre-order it now via Amazon online and Harper Collins.

Many thanks to lovereading.co.uk who provided me with an advance copy of this novel in exchange for an honest review.