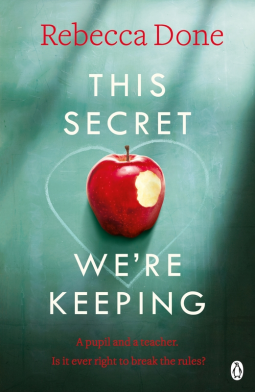 This Secret We're Keeping by Rebecca Done
Publisher: Michael Joseph
Release date: 7 April 2016
Rating: *****
Back cover blurb: One student. One teacher. A controversial story that breaks all the rules. Jess Hart has never forgotten Matthew Langley. He was her first love when she was fifteen -- but he was 10 years older and her maths teacher at school. It ended in scandal, with his arrest and imprisonment. Now 17 years later, a 42-year-old Matthew arrives back in Norfolk with a new identity, a long-term girlfriend and young daughter who know nothing of his past. Yet when he runs into Jess, long-suppressed memories of their love affair begin to be rekindled. But with so many secrets between them, will they ever be able to escape the damage they caused before?

And what a brilliant novel it is!

Jess Hart is a successful business woman with her own events catering company. She has a loving boyfriend Zak who wants her to move to London with him, but her roots and history are in Norfolk and she is reluctant to leave.

Will Green has recently returned to the area with his partner Natalie, and daughter Charlotte. Natalie is renovating a house in the area, but Will is nervous about being on old territory, about who he might bump in to, and what they might say to Natalie or Charlotte, as neither of them know that he has spent time in prison.

But Jess does, and after a chance meeting with her, the past comes flooding back to both of them, and we learn that Will Green is Matthew Langley.

Seventeen years earlier, Matthew Langley is Jess Hart's Maths teacher and the pair of them are involved in an intense and forbidden affair. At just Fifteen to Matthew's Twenty Five, Jess is classed as a child in the eyes of the law, and the pair of them know that they would be in serious trouble if their affair should ever be discovered.

But Jess is only a few months short of her Sixteenth birthday and the relationship is so mature and true that they believe they can make it through - if no one suspects them. Matthew Langley doesn't only have Jess' heart though, and a fellow teacher could be about to make trouble for them if she doesn't get her own way...

This Secret We're Keeping is available from 7 April 2016.
You can pre-order it now via Amazon online and Michael Joseph.