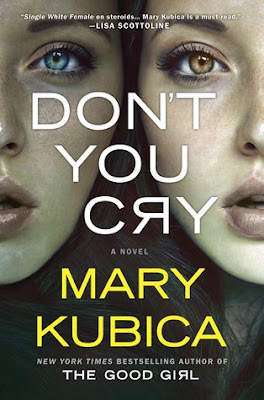 Back cover blurb: In downtown Chicago, a young woman named Esther Vaughan disappears from her apartment without a trace. A haunting letter addressed to My Dearest is found among her possessions, leaving her friend and roommate Quinn Collins to wonder where Esther is and whether or not she's the person Quinn thought she knew. Meanwhile, in a small Michigan harbour town an hour outside Chicago, a mysterious woman appears in the quiet coffee shop where 18 year old Alex Gallo works as a dishwasher. He is immediately drawn to her charm and beauty, but what starts as an innocent crush quickly spirals into something far more dark and sinister. As Quinn searches for answers about Esther, and Alex is drawn further under the stranger's spell, Mary Kubica takes readers on a taut and twisted rollercoaster ride that builds to a stunning conclusion.

Don't You Cry is Mary Kubica's third novel and in my opinion it's her best to date.

Quinn Collins awakes one morning to find her roommate Esther Vaughan missing. Quinn is unconcerned, "Saint Esther" is more than likely at church. It's Sunday morning after all and Esther never misses her Sunday morning sessions.

As the hours pass Quinn wonders where Esther could be, and decides she is doing someone in the community a good dead and stopping to get them both brunch, but as evening falls, she begins to worry.

Or has she intentionally run away?

Quinn dismisses the 'run away' theory quickly, Esther is far too sensible for that. There must be a valid reason for Esther's absence. Could the key to Esther's disappearance be among her things? Quinn wrestles with herself before finally looking in Esther's room for clues. but instead of giving Quinn answers, it only throws up more questions.

Meanwhile teenager Alex Gallo is working in a local restaurant to pay the bills and get away from his alcoholic Father. One day a mysterious young woman arrives who Alex immediately knows is not local. His attention is caught immediately by the beautiful stranger in his workplace. But as he find himself getting to know her, he realises that she is is not the woman he thinks she is at all.

I was so certain that I knew exactly how this novel was going to play out that the last couple of chapters had me go back and read the again just do that I could be sure what I was reading was right. I hadn't seen it coming at all, and this for me just highlights the brilliance of Kubica's writing.

Don't You Cry is available from 19 May 2016.
You can pre-order it now via Amazon online.