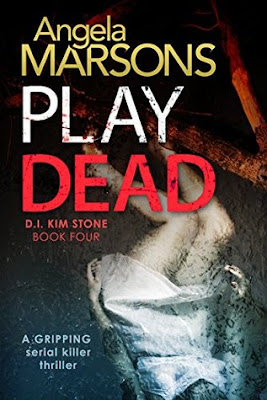 Play Dead by Angela Marsons
Publisher: Bookouture
Release date: 20 May 2016
Rating: ****
Back cover blurb: The dead don’t tell secrets… unless you listen. The girl’s smashed-in face stared unseeing up to the blue sky, soil spilling out of her mouth. A hundred flies hovered above the bloodied mess. Westerley research facility is not for the faint-hearted. A ‘body farm’ investigating human decomposition, its inhabitants are corpses in various states of decay. But when Detective Kim Stone and her team discover the fresh body of a young woman, it seems a killer has discovered the perfect cover to bury their crime. Then a second girl is attacked and left for dead, her body drugged and mouth filled with soil. It’s clear to Stone and the team that a serial killer is at work – but just how many bodies will they uncover? And who is next? As local reporter, Tracy Frost, disappears, the stakes are raised. The past seems to hold the key to the killer’s secrets – but can Kim uncover the truth before a twisted, damaged mind claims another victim …?

Play Dead is Angela Marson's fourth novel to feature D.I. Kim Stone, and in my opinion they just keep getting better.

The Westerley research facility is 'a body farm', a rare entity in the United Kingdom, which has been useful in helping Kim's colleagues in a neighbouring police force close some of their cold cases. D.I. Stone's boss is keen to see if it can do the same for the their team and duly sends them on their way to Westerley.

It is a macabre place, full of dead bodies left in various deliberate states of decay to see how the flesh reacts to certain 'experiments'. What the team don't expect to come across is a 'live' one, a 'fresh' body. A young woman with a mouth full of dirt and strange marks on her body.

Kim and her team work quickly to seal off the site to those who are not needed. Work begins to excavate the ground at Westerley and another body is duly found, and then the case takes a strange turn when a woman is found in the same circumstances, dirt in mouth, marks on body etc but very much still alive.

The only problem is, when she awakes from a coma days later in hospital, she can't remember a thing.

Is she the key to helping Stone and her team find the killer, or is she is a mere coincidence?

When Tracey Frost, Kim Stone's arch enemy goes missing, the investigation takes a surprising turn - for all involved. We see a different side here to both characters, and I can't wait to see how this will pan out in future novels.

Play Dead is another excellent D.I. Stone novel from Angela Marsons. Roll on the next one...
Play Dead is available from 20 May 2016.
You can pre-order it now via Amazon online.