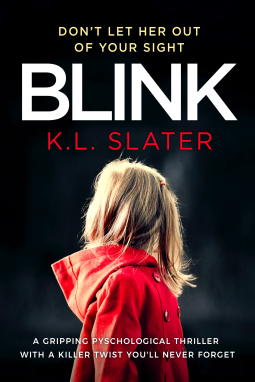 Rating: ****
Back cover blurb: What if the person you love most in the world was in terrible danger … because of you? Three years ago, Toni’s five-year-old daughter Evie disappeared after leaving school. The police have never been able to find her. There were no witnesses, no CCTV, no trace. But Toni believes her daughter is alive. And as she begins to silently piece together her memories, the full story of the past begins to reveal itself, and a devastating truth. Toni’s mind is trapped in a world of silence, her only chance to save herself is to manage the impossible. She must find a way to make herself heard. She must find her daughter. A compelling, gripping thriller with a breath-taking twist that will keep you awake until the early hours. Perfect for fans of The Girl on the Train, Behind Closed Doors and The Sister.

This is a really difficult novel to review without giving any of the plot twists away – which by the way are amazing!

Blink is a fast paced psychological thriller (if I hadn’t had to go to work I’d have read it in one sitting) that really grips you from the start.

Toni Cotter has recently moved to Nottingham with her five year old daughter Evie to be nearer her Mother.
Her late husband, Evie’s Father passed away whilst serving in Afghanistan and a fresh start is what both Mother and Daughter so desperately need.

Evie is swiftly enrolled into the local primary school, and Toni finds herself a job at the local Estate agency.
Determined to stand on her own two feet and not rely on her Mother’s help, Toni does struggle, but she believes she knows what’s best for her family.

If Toni thought that she was living in a nightmare when her husband died, she was very much mistaken.

For after a chain of unforeseen circumstances, Toni is late picking up Evie from school, and Evie is nowhere to be found. She has seemingly vanished and Toni’s nightmare has only just begun...


Blink is available now via Amazon online and all good book shops.