Review - A room full of killers by Michael Wood 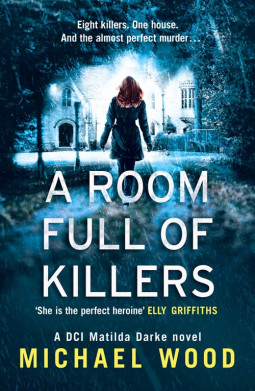 Back cover blurb: The third book in Michael Wood’s darkly compelling crime series featuring DCI Matilda Darke. Perfect for fans of Stuart MacBride, Mark Billingham and Val McDermid. Feared by the people of Sheffield, Starling House is home to some of Britain's deadliest teenagers, still too young for prison. Now the building’s latest arrival, Ryan Asher, has been found brutally murdered – stabbed twelve times, left in a pool of blood. When DCI Matilda Darke and her team investigate, they uncover the secrets of a house tainted by evil. Kate Moloney, the prison’s manager, is falling apart, the security system has been sabotaged, and neither the staff nor the inmates can be trusted. There’s only one person Matilda believes is innocent, and he’s facing prison for the rest of his life. With time running out, she must solve the unsolvable to save a young man from his fate. And find a murderer in a house full of killers…


DCI Matilda Darke is a detective that I have somehow not had the pleasure of meeting before. I’m not sure how the first two novels in the series passed me by, but somehow they did and I really need to go back and revisit them. I must stress at this point, that this novel can definitely be read as a standalone, I would just like to read more about Matilda.

Starling House is home to some of Britain’s deadliest killers, none of them old enough yet to be in an adult prison. When their newest arrival, Ryan Asher is found brutally murdered in a pool of blood, the police are suspicious. Despite the violence of the crime, his body is at odds with the rest of the crime scene, it looks to have been staged. And there are no shortage of suspects.

For those outside Starling House, suspicion would naturally fall on the remaining ‘inmates’, but DCI Matilda Darke and her team focus upon Starling House’s staff. If the house is as secure as everyone says it is, then they can be the only true suspects.

After a trying few days in which very little progress is made, there is a major blip in their investigation, another body is found. This time hanging from a tree. It is another of the boys from the house, and his death also seems staged. Made to look like suicide when it was clearly murder.

DCI Matilda Darke and her team must act quickly to find the perpetrator before they kill again, as they know it is only a matter of time before another victim is killed...

A room full of killers is a very interesting take on the traditional crime novel, with its difficult and controversial subjects, and I loved the ending. I look forward to the next DCI Darke instalment.
A room full of killers is available now via Amazon online and all good book shops.
Thank You to the publishers who invited me to view an advanced copy of this novel via netgalley in exchange for an honest review.