Review - Angels in the Moonlight by Caimh McDonnell 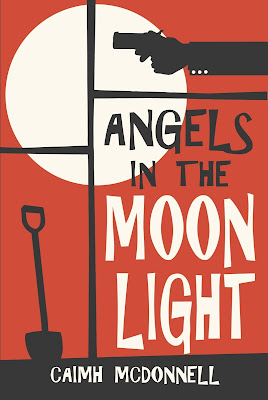 Angels in the Moonlight by Caimh McDonnell

Back cover blurb: For Detective Bunny McGarry, life is complicated, and it is about to get more so. It’s 1999 and his hard-won reputation amongst Dublin’s criminal fraternity, for being a massive pain in the backside, is unfortunately shared by his bosses. His partner has a career-threatening gambling problem and, oh yeah, Bunny's finally been given a crack at the big time. He is set the task of bringing down the most skilled and ruthless armed robbers in Irish history. So, the last thing he needs in his life is yet another complication. Her name is Simone. She is smart, funny, talented and, well, complicated. When her shocking past turns up to threaten her and Bunny’s chance at a future, things get very complicated indeed. If the choice is upholding the law or protecting those he loves, which way will the big fella turn? Angels in the Moonlight is the standalone prequel to Caimh McDonnell’s critically acclaimed Dublin Trilogy, and it is complicated.


Angels in the Moonlight is the prequel in Caimh McDonnell's Dublin trilogy series. As I've not yet read any of the others in the series, this was the perfect place for me to start!

Detective Bunny McGarry is what you might call an unconventional detective. In the first scene of the novel I have to say he didn't endear himself to me at all, but as I read on he definitely grew on me.

His partner on the force Detective Spain, known to all and sundry as 'Gringo' is (mostly) a positive influence on Bunny. When the two of them are tasked with capturing one of Dublin's most notorious criminals and his gang you'd think they'd be pleased, but both of them have history with the locals, and neither of them are keen on a surveillance operation that they know is unlikely to get them anywhere.

But Bunny and Gringo have been detectives a long time, and for the most part, do as they're told. Outside of work although firm friends, they are two very different people. Bunny is larger than life with a passion for classic cars, Gringo is more reserved with a passion for Jazz clubs - and gambling.

After a night of surveillance Gringo decides to introduce Bunny to the wonders of the Jazz world, and takes him to a club that he'd never normally frequent. Bunny is reluctant, but his mind and mood are changed dramatically when he meets Simone, a bartender and beautiful singer.

Angels in the Moonlight is a funny and charming novel that will make you fall a little bit in love with Bunny McGarry. Now, don't mind me, I'm off to find the rest of the books in the series!

Angels in the Moonlight is available via Amazon online and all good book shops.

Don't forget to follow the rest of the blog tour: 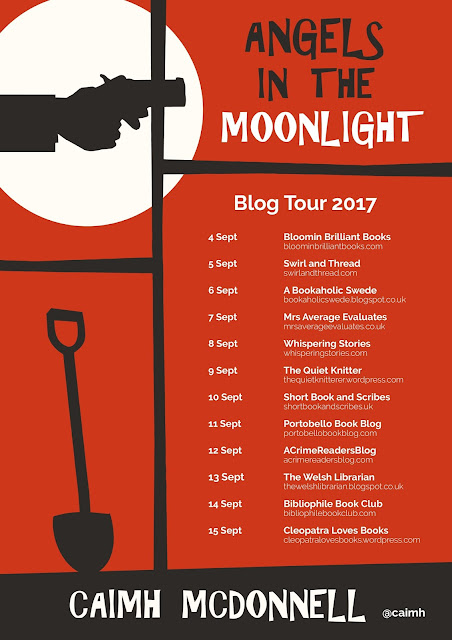 Caimh McDonnell is an award-winning stand-up comedian, author and writer of televisual treats. Born in Limerick and raised in Dublin, he has taken the hop across the water and now calls Manchester his home.

He is a man who wears many hats. As well as being an author, he is an award-winning writer for TV, a stand-up comedian and 'the voice’ of London Irish rugby club. His debut novel, A Man with One of Those Faces was released in 2016 and it is the first book of the Dublin Trilogy series. The follow-up, The Day That Never Come was published in 2017. Both books are fast-paced crime thrillers set in Caimh's home town of Dublin and they are laced with distinctly Irish acerbic wit.

Caimh’s TV writing credits include The Sarah Millican Television Programme, A League of Their Own, Mock the Week and Have I Got News for You. He also works as a children’s TV writer and was BAFTA nominated for the animated series ‘Pet Squad’ which he created.

During his time on the British stand-up circuit, Caimh has firmly established himself as the white-haired Irishman whose name nobody can pronounce. He has brought the funny worldwide, doing stand-up tours of the Far East, the Middle East and Near East (Norwich).

Thank You to Bookollective who invited me to take part in the blog tour in exchange for an honest review.