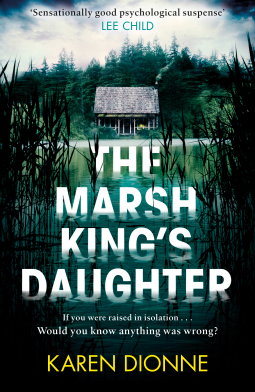 Back cover blurb: 'I was born two years into my mother's captivity. She was three weeks shy of seventeen. If I had known then what I do now, things would have been a lot different. I wouldn't have adored my father.' When notorious child abductor - known as the Marsh King - escapes from a maximum security prison, Helena immediately suspects that she and her two young daughters are in danger. No one, not even her husband, knows the truth about Helena's past: they don't know that she was born into captivity, that she had no contact with the outside world before the age of twelve - or that her father raised her to be a killer. And they don't know that the Marsh King can survive and hunt in the wilderness better than anyone... except, perhaps his own daughter.

Helena is deeply disturbed when the news breaks that the notorious child abductor known only as 'the Marsh King' has escaped from the maximum security prison where he supposed to be spending the rest of his life.

Helena knows immediately that she, her husband and two young daughters are in danger. The only trouble is, her family have no idea who she is, and why the Marsh King would be looking for her. But she is the reason that he is in prison, and she knows he won't rest until he finds her.

Growing up in 'captivity', Helena didn't recognise her Father as a monster at first. For he was the one person who taught her to how to survive in the swamp. He taught her how to shoot, how to use a knife and perhaps his biggest mistake - he taught Helena how to fend for herself.

Over time Helena realises that although she loves her Father he is a violent and dangerous man. When the chance presents itself she and her Mother escape with their lives barely intact. Helena soon realises that she is different from other kids her age, and that she can't express herself in the same way that they do.

Eventually though her Father is bought to justice and Helena grows into her life on the outside. When she meets her husband she is determined to leave her old life behind, and not be 'the Marsh King's Daughter' anymore.

Unfortunately it seems like the Marsh King has other ideas, and Helena must use everything he taught her in order to survive.

The Marsh King's Daughter is available now via Amazon online and all good book shops.