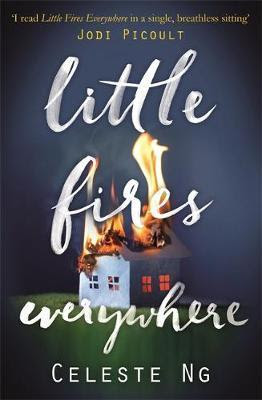 Rating: *****
Back cover blurb: Everyone in Shaker Heights was talking about it that summer: how Isabelle, the last of the Richardson children, had finally gone around the bend and burned the house down. In Shaker Heights, a placid, progressive suburb of Cleveland, everything is meticulously planned - from the layout of the winding roads, to the colours of the houses, to the successful lives its residents will go on to lead. And no one embodies this spirit more than Elena Richardson, whose guiding principal is playing by the rules. Enter Mia Warren - an enigmatic artist and single mother- who arrives in this idyllic bubble with her teenage daughter Pearl, and rents a house from the Richardsons. Soon Mia and Pearl become more than just tenants: all four Richardson children are drawn to the alluring mother-daughter pair. But Mia carries with her a mysterious past, and a disregard for the rules that threatens to upend this carefully ordered community. When the Richardsons' friends attempt to adopt a Chinese-American baby, a custody battle erupts that dramatically divides the town and puts Mia and Mrs. Richardson on opposing sides. Suspicious of Mia and her motives, Mrs. Richardson becomes determined to uncover the secrets in Mia's past. But her obsession will come at unexpected and devastating costs to her own family - and Mia's.

Mia Warren is a single mother to Pearl, a struggling but acclaimed artist, a photographer, they have always gotten by with no help from the outside world.

When they move to the idyllic community of Shaker Heights, Pearl is entranced by the new world she find herself in.

Not only are all of her neighbours wealthy, but the first floor apartment in their rental house is the biggest space they have ever lived in together, and the first time her entire life that Pearl has not shared a bed with her Mother.

The Richardson’s who rent the Warrens the apartment have four children/teenagers; Lexie, Trip, Moody and Izzy. Although the Richardson’s are in another class entirely they are soon in awe of their bright and pretty new teenage classmate and neighbour, Pearl.

Pearl understands that she will never have a life entirely like the Richardson’s but it doesn’t stop her becoming friends with her new neighbours. Her Mother has promised her that they won’t leave this time, that Shaker Heights is now their home, but what Pearl cannot possibly know is that her Mother is always on the move to escape her troubled past

A chance conversation with a work colleague starts Mia on a campaign that divides the community she has been welcomed into. Unfortunately Mrs Richardson isn’t keen to take the same side as the Warren’s particularly as the controversy involves one of her oldest friends.

Mrs Richardson is used to her life being perfect in Shaker Heights and doesn’t welcome interference from outsiders, particularly involving her best friend. She doesn’t specifically set out to delve into Mia’s past - but a series of events lead her there.

One questions whether perhaps she should take a second look at her own 'perfect' existence, before delving into the life’s of others...

Don't forget to check out the rest of today's blog tour hosts: 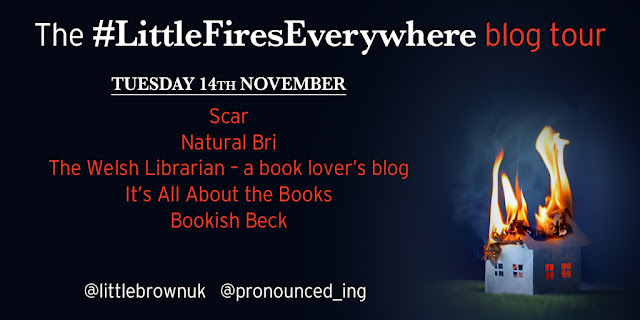 Thank You to the publishers who invited me to take part in this blog tour in exchange for an honest review.