Review - Anatomy of a scandal by Sarah Vaughan 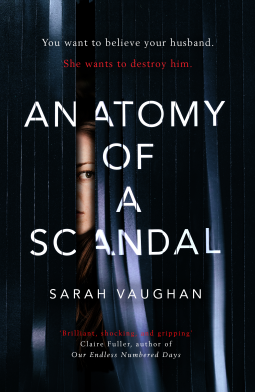 Anatomy of a scandal by Sarah Vaughan

Publisher: Simon & Schuster UK
Release date: 11 January 2018
Back cover blurb: You want to believe your husband. She wants to destroy him. Part courtroom thriller; part portrait of a marriage; part exploration of how our memories still haunt us, Anatomy of a Scandal is a disarming and provocative psychological drama. Sophie’s husband, James, is a loving father and a successful public figure. Yet he stands accused of a terrible crime. Sophie is convinced he is innocent and desperate to protect her precious family from the lies that threaten to engulf him. She’s kept his darkest secret ever since they were first lovers, at Oxford. And if she stood by him then, she can do it now. Kate is the barrister prosecuting his case. She’s certain that James is guilty and determined he should pay. No stranger to suffering herself, she doesn’t flinch from posing the questions few want to hear. About what happens between a man a woman when they’re alone: alone in bed, alone in an embrace, alone in a lift . . . Is James the victim of an unfortunate misunderstanding or the perpetrator of something sinister? Who is right: Sophie or Kate? This scandal – which forces Sophie to appraise her marriage and Kate her demons – will have far-reaching consequences for them all.

Anatomy of a scandal is a particularly topical novel at the time of reading, focusing on a scandal within the government, a close friend of the Prime Minister exposed for an affair with his office researcher.

James Whitehouse is a politician on the rise, a family man with a long-standing connection to the Prime Minister. His wife Sophie has known him since they were both at Oxford and thinks she knows all the skeletons in his closet.

However, when he is accused of a crime that threatens to tear Sophie’s perfect world in two, she must make a difficult decision. Does she stand by him? Or should she walk away now and protect herself.

Sophie is determined to stand by her husband, despite those around her trying to persuade her otherwise. She loves him, has always loved him and simply will not believe that he has done anything wrong. Although she does know deep down that he is capable.

Kate, the prosecuting barrister is certain that James is guilty. She is a successful barrister used to getting her own way, and will not go down without a fight.

With it's focus on political cover ups, university societies and class difference at Oxford, and difficulties of rape accusations and trials, Anatomy of a Scandal is a very different novel to any you will read this year.

Is James Whitehouse guilty? And if so, will he be bought to justice?

You will have to read to find out of course... I do think that Anatomy of a Scandal is a novel that would make a great TV drama, complete with suspense, flashbacks and fraught courtroom scenes. A 2018 must read.

Anatomy of a scandal is available from 11 January 2018.
You can pre-order it now via Amazon online and all good book shops.