Review - The way back to Florence by Glenn Haybittle 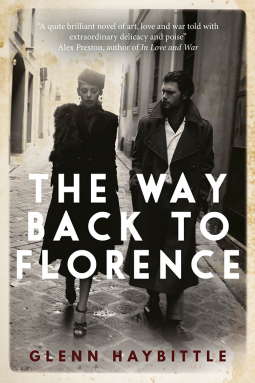 The way back to Florence by Glenn Haybittle
Publisher: Cheyne Walk
Release date: 6 July 2017
Rating: *** and a half

Back cover blurb: In 1937 Freddie (English), Isabella (Italian) and Oskar (a German Jew) become friends at an art school in Florence where they are taught by the dictatorial but magus-like Maestro and his sinister fascist assistant Fosco. When war arrives Freddie returns to England to become the pilot of a Lancaster bomber. Oskar, now a dancer, has moved to Paris where he escapes the 1942 roundup of Jews and arrives in Italy with his young daughter Esme. Isabella remains in Florence where she continues to paint. Until she is called upon by Maestro to forge an old master painting, apparently at the behest of the Führer himself, and as a result is seen as a Nazi collaborator by her neighbours. The murderous skies over Germany and a war-torn Italy in the grip of Nazi occupation provide the setting for this novel about the love of a separated husband and his wife and the love of a man for his young daughter. Freddie and Oskar both hope to find their way back to Florence. But Florence's heritage of preserving the identity and continuity of the past has never before been so under threat.

Isabella and Freddie are students at an art school in Italy when they meet, they fall in love and marry quickly but are torn apart by the war, for Freddie is English and must return to fight.

And fight he does as an RAF airman.

I adored the descriptions of the nights that Freddie and his crew were flying in V Victor.

Horrific though it must have been to take part, I imagine that there were many young men like Freddie all wanting to do their bit for the war effort and trying to keep both theirs and their comrades spirits high.

Isabella, lost without Freddie finds herself in an uncertain place, not knowing who to help, trust, offer shelter to or run away from...

She longs to be back with her husband, but letters are scarce and she doesn’t know if he’s dead or alive.

As the war rages on both Freddie and Isabella fear the worst as they hear nothing from each other.

Can a war keep them together or will it tear them apart?

The way back to Florence is available now via Amazon online and all good book shops.