Blog Tour [Review] - Shame on You by Amy Heydenrych 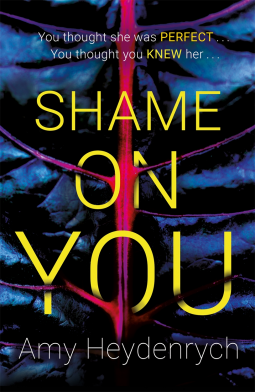 Shame on You by Amy Heydenrych

E-Release: 14 December 2017
Publisher: Twenty7 (Bonnier Zaffre)
Back cover blurb: You think you know her . . . Meet Holly. Social media sensation. The face of clean eating. Everyone loves her. Everyone wants to be her. Or do they? When Holly is attacked by a man she's only just met, her life starts to spiral out of control. Was she targeted because of her online wellness empire, or is there a darker reason behind the attack? He seemed to know her - but she doesn't know him. Or does she? What if Holly isn't who she seems to be? What if Holly's living a lie? But surely we all lie a bit online, don't we . . .? FRIEND REQUEST meets THE GIRL BEFORE in this psychological thriller that will keep you guessing.


Holly is an instagram sensation. Her popularity at having forgone conventional cancer treatments to positively self-manage her cancer through diet and controversial alternative therapies knows no bounds.

Holly is social media's beloved face of clean eating and claims to have 'cured' herself of cancer through diet, exercise, the power of fruits and vegetables.

When she turns up in a fast food restaurant one night, clutching her face, some onlookers are delighted by her slip into 'normality' as they capture her image on their mobile phones.

Being photographed in a fast food restaurant is the least of Holly's worries.

Brutally attacked by a man she thought she was getting on well with, having met him earlier that day in a coffee shop, Holly is seeking help from the first place she finds open. Her attacker has long fled, his parting words sending a chill through Holly.

She knows that her attack is not the last she will see of him and she fears for her own future more than her own safety.

Because the thing is, that once you tell one little white lie online, its very easy to tell another, and another, and before you know it things spiral out of control.

Holly knows that she has been targeted because of things she has done in the past, she just doesn't know how much her attacker knows, and that is what frightens her the most.

There are some very unsavoury characters in this novel, but that only adds to the enjoyment in my opinion. The ending I think is going to be one that divides opinion, but this is a very clever and very current novel that deserves to do well.


Shame On You is available from 14 December 2017.
You can pre-order it now via Amazon online.

Thank You to the publishers who invited me to take part in the blog tour in exchange for an honest review.