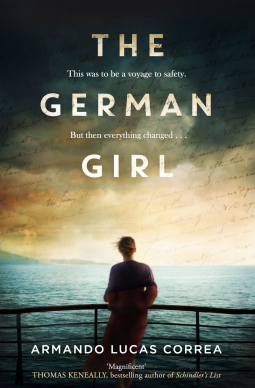 The German Girl by Armando Lucas Correa
Publisher: Simon & Schuster
Release date: 14 December 2017
Rating: *****
Back cover blurb: The German Girl sweeps from Berlin at the brink of WWII to Cuba on the cusp of revolution, to New York in the wake of September 11th, before reaching its deeply moving conclusion in the tumult of present-day Havana. Based on a true story, this wonderful novel gives voice to the joys and sorrows of generations of exiles, forever seeking a place called home. Before everything changed, Hannah Rosenthal lived a charmed life. But now the streets of Berlin are draped in swastikas and Hannah is no longer welcome in the places she once considered home. A glimmer of hope appears in the shape of the St Louis, a transatlantic liner that promises Jews safe passage to Cuba. The Rosenthals sell everything to fund visas and tickets. At first the liner feels like luxury, but as they travel the circumstances of war change, and it soon becomes their prison. Seven decades later in New York, on her twelfth birthday Anna Rosen receives a package from Hannah, the great-aunt she never met but who raised her deceased father. Anna and her mother immediately travel to Cuba to meet this elderly relative, and for the first time Hannah tells them the untold story of her voyage on the St Louis.

Hannah and Anna tell their stories decades apart but both are united by the loss of their fathers to war and terrorist tragedies. Hannah to a concentration camp in WW2 and Anna to the New York skyline on September 11th.

Told in alternating chapters for the most part, the German Girl begins with Hannah (the German Girl of the novels title) and her desire to end her own and her parents life just before WW2. She doesn't want to leave the country she loves, yet she has no choice as she is a Jew, and although no one knows the horror that awaits, the family know that staying in Germany is not an option.

The Nazi's are never explicitly refereed to in this novel, only implied as the 'ogres' but the sinister descriptions of their behaviours and flags leaves the reader in no doubt. I wasn't familiar with the story of the ship, St. Louis before picking up the German Girl, but like so many WW2 tales, it is a tragic one. The blindsided behaviour of the US and Canada cost many their lives.

When Hannah arrives in Cuba, it is with the belief that her best friend Leo and his family will follow as soon as the ship is allowed to dock. But their fate has already been sealed, although the war may not have yet begun.

Decades later in New York, Anna is trying to encourage her Mother out of her bedroom. Since her Father was killed on 9/11 she has never been the same, but then a letter arrives from a relative - in Cuba; Hannah, and suddenly life got a whole lot more interesting.

The German Girl is a beautifully written novel with a tragedy at its heart, a must read for historical fiction fans, a very impressive debut...

The German Girl is available from 14 December 2017.
You can pre-order it now via Amazon online and all good book shops.