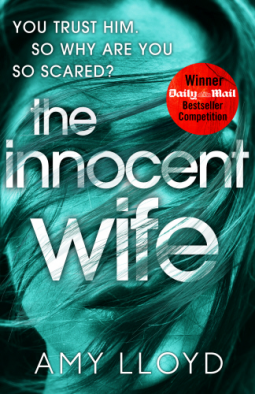 The Innocent Wife by Amy Lloyd
Publisher: Cornerstone
Release date: 28 December 2017
Rating: ****
Back cover blurb: Twenty years ago, Dennis Danson was arrested and imprisoned for the brutal murder of a young girl in Florida's Red River County. Now he's the subject of a true-crime documentary that's whipping up a frenzy online to uncover the truth and free a man who has been wrongly convicted. A thousand miles away in England, Samantha is obsessed with Dennis's case. She exchanges letters with him, and is quickly won over by his apparent charm and kindness to her. Soon she has left her old life behind to marry him and campaign for his release. But when the campaign is successful and Dennis is freed, Sam begins to discover new details that suggest he may not be quite so innocent after all ...

Samantha is lonely. Her boyfriend Mark didn't want commitment. Sam just thought he was spinning her a line, because isn't that what they all say?

Surely everybody wants to be with somebody they love? Right?

When Sam starts watching a true-crime documentary about dangerous US murderer, Dennis Danson with Mark she is caught up completely in the case and joins online forums dedicated to getting Dennis exonerated.

It isn't until she and Mark split that Sam plucks up the courage to write to Dennis in prison. She doesn't expect a reply from him, and she certainly doesn't expect to feel the way that she does when the reply comes.

Dennis Danson is charming, charismatic and definitely not a murdered. Sam is going to prove his innocence with the help of Carrie, maker of the documentary that she and Mark were glued to for months.

Sam makes a commitment to help free and get justice for Dennis. When she agrees to visit him for the first time she has no idea what to expect, but they are undeniably attracted to one another.

As the fight for justice continues Sam extends her stay in the US and agrees enthusiastically to Dennis' surprise proposal. But can even his future wife really know how to handle Dennis when he is finally released from prison and cleared of any wrongdoing.

The Innocent Wife is a novel that will have you asking yourself a lot of questions - not all of them will be answered, and the most intriguing of all 'what makes a woman fall in love with a serial killer'? Well you'll have to work that one out for yourself...


The Innocent Wife is available from 28 December 2017.
You can pre-order it now via Amazon online and all good book shops.