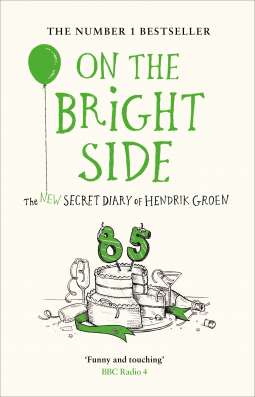 On the bright side - the new secret diary of Hendrik Groen by Hendrik Groen
Publisher: Michael Joseph
Release date: 11 January 2018
Back cover blurb: 85-year-old Hendrik Groen is fed up to his false teeth with coffee mornings and bingo. He dreams of escaping the confines of his care home and practicing hairpin turns on his mobility scooter. Inspired by his fellow members of the recently formed Old-But-Not-Dead Club, he vows to put down his Custard Cream and commit to a spot of octogenarian anarchy. But the care home's Director will not stand for drunken bar crawls, illicit fireworks and geriatric romance on her watch. The Old-But-Not-Dead Club must stick together if they're not to go gently into that good night. Things turn more serious, however, when rumours surface that the home is set for demolition. It's up to Hendrik and the gang to stop it - or drop dead trying . . . He may be the wrong side of 85, but Hendrik Groen has no intention of slowing up - or going down without a fight

Mr. Grumpy, Hendrik Groen is back - and I am delighted. Following on from The Secret Diary of Hendrik Groen 83 1⁄4 Hendrik has had a bit of a break before deciding to pick up his diary again at the age of 85.

Hendrik's best friend Evert, previously a bit of a naughty influence on Hendrik, is declining noticeably in health and Hendrik is worried for him. Evert won't hear a word of it, and constantly tries to reassure Hendrik that he is fine. But they both know that is not the truth.

As members of the Old-but-not-dead club, a group of seniors who regularly 'escape' the nursing home for meals out, trips to the cinema etc both Hendrik and Evert see it as their responsibility to create as much havoc as possible often with hilarious consequences.

But whilst for the most part Hendrik and Evert act like irresponsible teenage boys, the message hidden within this novel is a serious one. We are all getting older, and there is much to think about if we don't want our families to have to think about it for us...

I don't want to give too much away as I think that everyone needs a bit of Hendrik in their lives, I kind wish he was my Granddad!!

I really hope that there is another sequel in the pipeline because I can't wait to read what Hendrik and his friends might get up to next!

On the Bright Side - the new Secret Diary of Hendrik Groen by Hendrik Groen is available from 11 January 2018
You can pre-order it now via Amazon online and all good book shops.