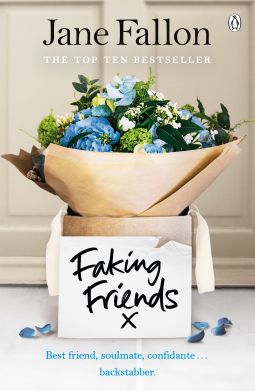 Faking Friends by Jane Fallon
Publisher: Michael Joseph
Release date: 11 January 2018
Back cover blurb: Best friend, soulmate, confidante . . . backstabber. Amy thought she knew everything there was to know about her best friend Melissa. Then again, Amy also thought she was on the verge of the wedding of her dreams to her long-distance fiancé. Until she pays a surprise trip home to London. Jack is out, but it's clear another woman has been making herself at home in their flat. There's something about her stuff that feels oddly familiar . . . and then it hits Amy. The Other Woman is Melissa. Amy has lost her home, her fiancé and her best friend in one disastrous weekend - but instead of falling apart, she's determined to get her own back. Piecing her life back together won't be half as fun as dismantling theirs, after all.


Faking Friends is the first Jane Fallon novel I've read, and it certainly won't be the last. The start of the novel is a very real scenario that could happen to any of us. Amy, working away comes home to find that her fiancee is having an affair, with her best friend.

That's where the normality ends. Amy is an actress, a very good actress. Her best friend Melissa has always wanted to be an actress, but never quite made the big time. Is sleeping with Jack her way of getting back at Amy for being more successful than her?

Or is it just Melissa's usual style of wanting what she cannot have?

Amy, shocked to the core at Melissa and Jack's betrayal decides to put her acting skills to use. She doesn't tell anyone that she's back in the country, bar a lovely old Uni friend who dislikes Melissa and wants to support Amy.

And so the revenge begins...

To start off with Amy's revenge is subtle as she tries to find out exactly how long the betrayal has been going on. When she discovers the truth she only becomes more determined to hurt Melissa and Jack in the same way that they have hurt her.

There are some truly cringe worthy moments in this book, where you think would someone really do that? But as we learn more about all involved every single little thing seems truly justified. A brilliant page-turner, Faking Friends is just what we need on a cold January evening!

Faking Friends is available from 11 January 2018.
You can pre-order it now via Amazon online and all good book shops.

Many thanks to the publishers who invited me to review this title via netgalley in exchange for an honest review.