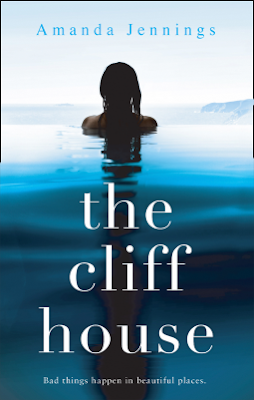 Back cover blurb: Some friendships are made to be broken. Cornwall, summer of 1986. The Davenports, with their fast cars and glamorous clothes, living the dream in a breathtaking house overlooking the sea. If only… thinks sixteen-year-old Tamsyn, her binoculars trained on the perfect family in their perfect home. If only her life was as perfect as theirs. If only Edie Davenport would be her friend. If only she lived at The Cliff House…

Tamsyn Tresize is Sixteen years old, and totally obsessed by the Cliff House and it’s inhabitants- as only a Sixteen year old girl can be.

Tamsyn’s late Father is the one who introduced her to the secret hideaway, where she can watch the gorgeous house completely undetected.

Robert Tresize also taught his daughter how to creep into the house when it was unoccupied and swim in its opulent Art Deco themed outdoor pool.

Edie (Edith) Davenport is Seventeen and effortlessly glamorous in the way only those born into privilege can be.

Her family are the family that Tamsyn watches when they visit their holiday home, the Cliff House. But Tamsyn doesn’t know that Edie exists. Until she is caught in the swimming pool that no one is home...

Edie and her family have in fact arrived for the summer. Her parents are busy and have dropped Edie off at the house before they will rejoin her later. Tamsyn is mortified to have been caught, but enthralled by Edie’s presence.

Despite their obvious class differences the two girls soon become friends. But for Tamsyn at least, Edie is just another element of the Davenport’s lives to become obsessed with.

And we all know that obsession doesn’t end well...