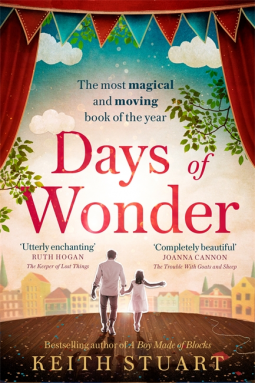 Days of Wonder by Keith Stuart

Back cover blurb: Tom, single father to Hannah, is the manager of a tiny local theatre. On the same day each year, he and its colourful cast of part-time actors have staged a fantastical production just for his little girl, a moment of magic to make her childhood unforgettable. But there is another reason behind these annual shows: the very first production followed Hannah's diagnosis with a heart condition that both of them know will end her life early. And now, with Hannah a funny, tough girl of fifteen on the brink of adulthood, that time is coming. With the theatre under threat of closure, Hannah and Tom have more than one fight on their hands to stop the stories ending. But maybe, just maybe, one final day of magic might just save them both. A tale about growing up, the beauty of a special bond between father and daughter, and finding magic in everyday life, Days of Wonder is the most moving novel you'll read all year.

Days of Wonder is a well, let’s just say, a wonder of a novel, and one I think will stay with me for a very long time.

I must admit I was a little apprehensive when I started this novel as “A Boy made of blocks” was so damn good, and I wasn't sure what to expect from the authors next, but I actually think it was even better.

Hannah Rose is Fifteen and has a chronic illness, a life limiting heart condition. She knows that her life will end earlier than she wants it to and she isn’t afraid of dying. She also knows that her Father isn’t prepared for this at all.

Tom Rose, Hannah’s Father, is a single parent and a theatre manager. His life is devoted to those two things since Hannah’s Mother left when she was small. His life, despite its challenges has been filled with joy with Hannah growing up and his amazing theatre friends putting on some memorable productions.

We first meet the pair of them in Hannah’s first performing role at the Willow Tree Theatre. Although she has always been involved in productions, her dead Dad has naturally been worried about her treading the boards, but as she approaches her Sixteenth Birthday she puts her foot down insists on a role in the latest production.

It is here that we learn of her illness for the first time, and how things can change within a blink of eye. Without giving too much away, I can only reveal that Hannah’s condition takes a sudden turn for the worse and the theatre is threatened with closure by the local council.

Everything that seemed perfect in life is suddenly thrown into uncertainty and Hannah and Tom must rally around each other as well as their friends to plan for the future. I don’t know if it’s because I also live with a Chronic illness (not life threatening) but I really identified with Hannah and her struggles. She is an amazing young woman and Tom a rightfully proud parent.

Days of Wonder is beautifully written novel and one I highly recommend. I can’t wait to see what Keith Stuart has up his sleeve next.

Days of Wonder is available from 7 June 2018.
You can pre-order it now via Amazon online and all good book shops.