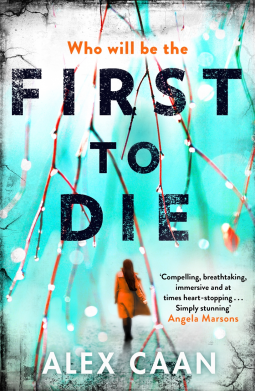 First to Die by Alex Caan

Publisher: Zaffre
Release date: 14 June 2018
Back cover blurb:  SOMEWHERE IN THE CROWD IS A KILLER. Bonfire Night and St James's Park is filled with thousands of Anonymous protesters in a stand-off with the police. When a cloaked, Guido Fawkes mask-wearing body is discovered the following morning, Kate Riley and Zain Harris from the Police Crime Commissioner's office are called in. The corpse has been eaten away by a potentially lethal and highly contagious virus. The autopsy reveals the victim was a senior civil servant, whose work in international development involved saving lives. Why would anyone want him dead? THEY WILL STRIKE AGAIN. As the research team looking into the origins of the deadly virus scramble to discover an antidote, first one, then another pharmacist goes missing. Meanwhile, a dark truth starts to emerge about the murder victim: he was an aggressive man, whose bullying behaviour resulted in the suicide attempt of one of his former staff members. AND TIME IS RUNNING OUT... With thirty lives potentially at stake, Kate and Zain have their work cut out for them. Can they find the two missing pharmacists in time, or will they too end up dead?


First to Die is the first Alex Caan novel that I’ve read, and I’m already looking forward to the next. Biological terrorism is a topical subject, particularly with recent events in Salisbury, here it is handled sensitively but chillingly.

The plot is plausible, not outside the realms of reasonable possibility and that’s what makes it so terrifying.

Westminster, Bonfire Night and thousands of anonymous faces with guy fawkes masks and are gathered. Plain clothes detectives are hidden amongst the revellers when an explosive device goes off injuring Zain Harris.

Thankfully Zain isn’t badly injured. Just as well when he and his colleague Kate Riley from the Police Crime Commissioner's office are called to a park the following morning where a masked body is found.

The body has been there a matter of hours but has already started to show signs of decay. Tests reveal that this is from a potentially lethal and highly contagious virus and the body must be quarantined before any further testing.

When the victim is revealed to be a senior civil servant, the likelihood of biological terrorism seems the likely crime. But before the team can get any more answers a key witness in the case goes missing.

Without giving too much away, First to Die is a complex novel that does require a certain level of concentration, but trust me, it’s worth it...

First to Die is available now via Amazon online and all good book shops.