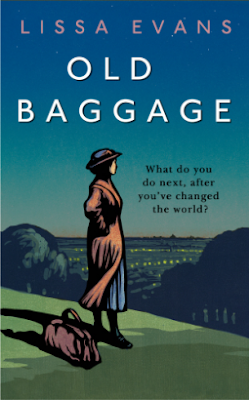 Back cover blurb: What do you do next, after you’ve changed the world? It is 1928. Matilda Simpkin, rooting through a cupboard, comes across a small wooden club – an old possession of hers, unseen for more than a decade. Mattie is a woman with a thrilling past and a chafingly uneventful present. During the Women’s Suffrage Campaign she was a militant. Jailed five times, she marched, sang, gave speeches, smashed windows and heckled Winston Churchill, and nothing – nothing – since then has had the same depth, the same excitement. Now in middle age, she is still looking for a fresh mould into which to pour her energies. Giving the wooden club a thoughtful twirl, she is struck by an idea – but what starts as a brilliantly idealistic plan is derailed by a connection with Mattie’s militant past, one which begins to threaten every principle that she stands for. Old Baggage is a funny and bittersweet portrait of a woman who has never, never given up the fight.

As we mark one hundred years since women were given the ability to vote, this novel seems particularly pertinent.

When Mattie Simpkin is mugged she inadvertently finds herself in a spot of bother.

Known to the police through her involvement of the women’s suffrage campaign, they are quick to come knocking on her door after an accidental incident leaves a young woman injured at Mattie’s hands.

Mattie is quick to explain that she was actually being mugged and threw something in order to try and stop the culprit. Her throw just slightly off. The police are disbelieving, wondering why she hadn’t reported the crime to them.

Mattie is quick to point out that her relationship with them in the past hasn’t exactly been the best.

No matter, to cut a long story short, Mattie is given a new purpose in life when she tracks down the poor unfortunate girl whom she injured on that fateful day.

Ida Pearse is quickly taken under her and her house mate Florrie Lee’s (also known as the Flea) wing.

This is a beautifully written novel that touches upon sexuality, political reform and the difficulties of young women growing up in the late 1929s. Yet another brilliant novel from Lissa Evans.

Old Baggage is available now via Amazon online and all good book shops.