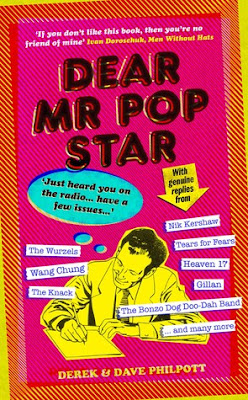 Back cover blurb: For nearly 10 years, ‘Team Philpott’, as their followers fondly refer to them, have been on a quite bonkers crusade, writing good old-fashioned letters to pop and rock stars (sometimes even sent to their home addresses with prior consent!), either picking up on genuine ambiguities within their lyrics or often deliberately misunderstanding them for comedic effect. The letters are eminently publishable in their own right, mixing sharp wit, confusion, and mundane daily chores with trips to the shops, daytime telly, Derek’s legs playing up, and unarguable logic in relation to questioning the offending chart hits under scrutiny. What makes this project especially deserving of attention, however, is that it has achieved a feat never before attempted or probably even thought of. With the missives online for all to see on what was becoming a hugely popular website, the artists quite unexpectedly started to reply, writing back in just as witty and articulate a fashion, politely pointing out exactly where the original letter went wrong...or right. Also, crucially, nearly all of the responses were procured via ''the back door of the industry'', via roadies, mutual fans, cousins of bass players ... Contd. here.


What would you do if I sang out of tune?

Er, probably stick my fingers in my ears and tell you to shut up if I’m honest!

It’s funny isn’t it, how we listen to popular music day in, day out without paying too much attention to the lyrics.

At least, that goes for the majority of us...

But then there are others, like me, and Derek and Dave Phillpott who sit and listen to a song and wonder what exactly the meaning behind those lyrics are.

What exactly were these people thinking when they put pen to paper? What utter nonsense was going through their head? Let’s face it, a lot can be attributed to their hedonistic life style, sure, but what if there was more to it?

Now is your chance to find out, because the aforementioned Derek and Dave acted upon their curiosities and started writing (actual) letters to various pop stars, some of whom decided to write back and something wonderful was started.

This is the second book in what I hope will continue to be a popular series. I mean let’s be honest, there are still so many songs to explore!

Personal favourites for me are, Stan Cullimore - The Housemartins (Me and the Farmer), the Jags (Back of my hand and the B-52’s (Love Shack) but there are many many gems in this amazing collection and I urge you to snap up a copy as soon as you can!

Thank you hugely to Dave who sent me an advanced proof copy of this novel in exchange for a (very) honest review.