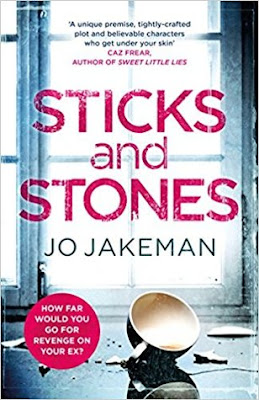 Back cover blurb: How far would you go for revenge on your ex? Imogen’s husband is a bad man. His ex-wife and his new mistress might have different perspectives but Imogen thinks she knows the truth. And now he’s given her an ultimatum: get out of the family home in the next fortnight or I’ll fight you for custody of our son. In a moment of madness, Imogen does something unthinkable. Something that puts her in control. But how far will she go to protect her son and punish her husband? And what will happen when his ex and his girlfriend get tangled up in her plans? Sticks and Stones is a deliciously twisting psychological thriller from an exciting new voice.

Imogen is still reeling after the death of her husband when we meet her at his funeral. However it quickly becomes apparent that all may not be as it seems. Imogen and Phillip are going through a rather messy divorce, and Imogen is Mrs. Rochester in name only; the two having been separated for some time.

Phillip Rochester's first ex-wife Ruby and his girlfriend Naomi are also present, at his funeral, none of the three women are particularly upset by the departure of Phillip, more shell shocked if anything at his sudden death.

Phillip Rochester was a well respected Policeman, concerned only with his reputation, as he was a very different man in the force to the man he was at home.  All three of the women in his life, saw the different side to Phillip to some extent but Imogen and Naomi bore the worst of his behaviour.

For Imogen, it was one of the drivers behind her divorce, the other finding out about Naomi, and realising finally that another woman was more than welcome to him, if she wanted him. Following the funeral, we are taken back in time to the days and months leading up to the funeral.

I can’t say much more without giving anything away, so I’ll just say that Sticks and Stones is a rather dark, but brilliant debut and I look forward to the author's next novel!

Sticks and Stones is available now via Amazon online and all good book shops.