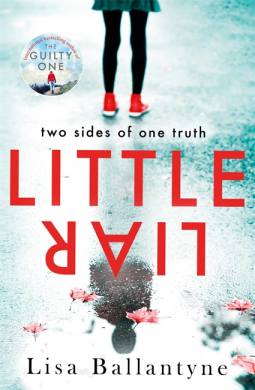 Back cover blurb: The accused. While Nick Dean is enjoying an evening at home with his family, he is blissfully unaware that one of his pupils has just placed an allegation of abuse against him - and that Nick's imminent arrest will see the start of everything he knows and loves disintegrating around him. Because, mud sticks, right? No matter if you're innocent or guilty. The accuser. When Angela Furness decides that enough is enough - she hates her parents, hates her friends and, most of all, despises what has recently happened at school - she does the only thing she knows will get her attention: calls the police. But Angela is unaware that the shocking story she is about to tell will see her life begin to topple. Because, once you've said what you've said, there's no way back, right? No matter if you're innocent or guilty. In a gripping tale of two families torn apart by one catastrophic betrayal, Little Liar illustrates the fine line between guilt and innocence, and shows that everyone has their secrets, even those we ought to trust the most...

Angela Furness is barely a teenager, but already she has serious anger and behavioural issues and absolutely hates living with her Mother. She is a bully, but hates herself, and her life is about to change dramatically for the worse.

Nicholas Dean is a former successful actor who now teaches drama workshops in schools to make ends meet. His wife is the breadwinner in the relationship and sometimes Nick feels inadequate. His feelings of inadequacy grow as his wife negotiates a successful account in her role.

But would this be enough to make him do something terrible?

This is very much a he said/she said novel, told from different perspectives and backgrounds, and questioning every little thing about every character all of the way through. Your suspicions will lie with each character in turn as they reveal something unsavoury about them as an individual.

Little Liar is an interesting novel as it is very hard to feel sympathy for Angela most of the way through it, due to her behaviour, even though you instinctively know that she has gone through something so terrible that you can't even begin to comprehend it.

Little Liar touches upon some very difficult subjects with sensitivity and is a very thought provoking and well written novel, and I look forward to the authors next!

Little Liar is available from 2 August 2018.
You can pre-order it now via Amazon online and all good book shops.