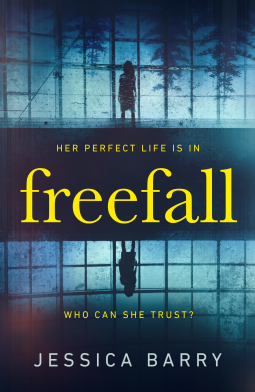 Back cover blurb: Surviving the plane crash is only the beginning for Allison. The life that she’s built for herself – her perfect fiancé, their world of luxury – has disappeared in the blink of an eye. Now she must run, not only to escape the dark secrets in her past, but to outwit the man who is stalking her every move. On the other side of the country, Allison’s mother is desperate for news of her daughter, who is missing, presumed dead. Maggie refuses to accept that she could have lost her only child and sets out to discover the truth. Mother and daughter must fight – for survival and to find their way through a dark web of lies and back to one another, before it’s too late… Heart-stopping and addictive, FREEFALL is a stunning thriller that explores the deep and complex bond between mothers and daughters.

Firstly, I have to confess to wanting to read Freefall because it featured a plane crash. Yes, I know I'm weird, but regular readers of my blog over the years will have gotten used to this strange plane fascination that I have.

Sadly, for me (and probably luckily for everyone else) the detail of the plane crash itself, is not a main feature of the novel. It serves only to kick off our strange tale of complicated domestic relationships and fight for survival.

Allison, is the sole survivor of a plane crash in a secluded area. She has no idea where she is, or where she is going, only that she needs to get away from the burning wreckage as quickly as possible if she is to continue to live.

When Maggie receives a knock on the door from the local police, informing her that her daughter is missing, presumed dead, Maggie knows that it cannot be. She is certain she would know if her daughter was dead.

But Maggie and Allison have been estranged for months, and as the investigation into the accident progresses, Maggie wonders if she really knew Allison at all. The more she discovers, the more concerned she is, and more convinced that her daughter is alive.

Allison meanwhile just wants to go home. She is tired of living a lie. She is tired of everything. But more than anything she is scared of what might happen should anyone know that she survived that crash. Going home, may no longer be an option ...

Freefall is available now via Amazon online and all good book shops.

Thank You to the publishers who approved my request in exchange for an honest review.
Newer Post Older Post Home