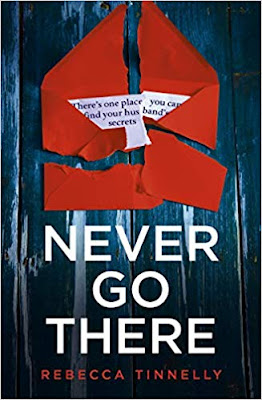 Never Go There by Rebecca Tinnelly
Publisher: Hodder & Stoughton
Release date: 7 March 2019
Back cover blurb: Nuala and James had the perfect relationship. They were young and in love, and so Nuala didn't question why James told her to never contact his family or to visit the small Somerset town he was from. But now James is dead, and Nuala needs to know what he was keeping from her all of those years. Nuala is on her way to a town full of her husbands secrets. And she is about to discover that sometimes secrets are better left buried.

Nuala Greene has lost her husband to a tragic accident that finds her in his home town, tracking down his Mother to break the news. Nuala has never met Jame's Mother before, isn't even certain that she knows he exsists, because James has vowed never to return to his home town.

Nuala doesn't know why, and in her heart she knows that she should leave things well alone. But she can't help but wonder, what if anything James was trying to keep a secret from her.

James Greene (or James Lunglow) may be gone, but he is certainly not forgotten in his home town. Seven Years ago, circumstances forced him to leave the place he grew up in and start a new life in London, leaving those behind who cared for him.

Some more than others.

This is a hard novel to go into too much detail about, without giving anything away, so I won't. But I will say that none of the characters in this novel are particularly likeable, in fact I'd even describe some of them as thoroughly unpleasant. But I think this plays to the overall atmosphere of this novel, that is quite dark in places.

It is an impressive debut, and I look forward to the author's next work.

Never Go There is available now via Amazon online and all good book shops.