Review - No Way Out by Cara Hunter 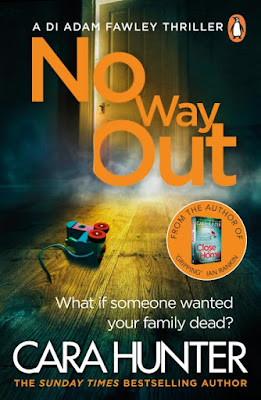 No Way Out by Cara Hunter

Publisher: Viking books
Release date: 18 April 2019
Back cover blurb: It's one of the most disturbing cases DI Fawley has ever worked. The Christmas holidays, and two children have just been pulled from the wreckage of their burning home in North Oxford. The toddler is dead, and his brother is soon fighting for his life. Why were they left in the house alone? Where is their mother, and why is their father not answering his phone? Then new evidence is discovered, and DI Fawley's worst nightmare comes true. Because this fire wasn't an accident. It was murder. And the killer is still out there...

No Way Out is the third title in Cara Hunter's Adam Fawley series, but could easily be read as a stand alone novel.

It’s the 4th of January and whilst most are struggling back to work and normality after the Christmas and New Year break, for one family, life will never be normal again.

Two young boys are pulled from the wreckage of their burning family home, one dead, one fighting for his life, his parents are nowhere to be found.

The fire service are reluctant to speculate on the cause of the fire other than it appears to be deliberate.

As if that wasn’t bad enough, the person who started the fire wasn’t an opportunist. It was someone who knew that the family were there, someone who meant to murder.

Fawley and his team have some difficult questions to answer. Why were the children in the house alone? Where on earth are the parents? And most importantly who on earth would want to harm two innocent children?

Time of the essence, because the killer is still out there, and the parents still missing. It’s possible this this could be a coincidence. But most good detectives would argue that in major crime there are no coincidences...

No Way Out is available from 18 April 2019.
You can pre-order it now via Amazon online and all good book shops.

Thank You to the publishers who approved my request in exchange for an honest review.
Newer Post Older Post Home