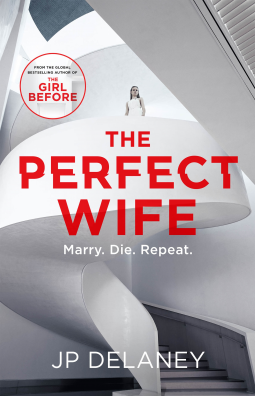 The Perfect Wife by JP Delaney
Publisher: Quercus Books
Release date: 8 August 2019
Back cover blurb: "There's something I have to explain, my love," he says, taking your hand in his. "That wasn't a dream. It was an upload." Abbie wakes in a hospital bed with no memory of how she got there. The man by her side explains that he's her husband. He's a titan of the tech world, the founder of one of Silicon Valley's most innovative startups. He tells Abbie she's a gifted artist, a doting mother to their young son, and the perfect wife. Five years ago, she suffered a terrible accident. Her return from the abyss is a miracle of science, a breakthrough in artificial intelligence that has taken him half a decade to achieve. But as Abbie pieces together memories of her marriage, she begins questioning her husband's motives - and his version of events. Can she trust him when he says he wants them to be together for ever? And what really happened to her, half a decade ago?

The Perfect Wife is a unique novel. Focusing on the world of Robotics, Autonomy and real life relationships, it might sound a little scientific, but I think this is a novel for any fan of a gripping thriller.

Five years after a mysterious accident, Abbie wakes to find her husband Tim at her bedside. She is confused about what has happened, but ecstatic to be alive. Until Tim tells her that she isn't actually alive.

Abbie died five years ago, and genius Tim has spent all this time perfecting her replacement - or replica self.

Abbie is a Cobot (A Collaborative Robot) - and yes, I did have to look that up to see what it meant! A Collaborative Robot is one that is intended to physically interact with humans in a shared work space (as opposed to a normal 'robot' that are designed to operate autonomously).

Abbie has been 'uploaded' with software to give her Abbie's memories and personality, so that her still grieving husband can continue his life with his 'wife' by his side.

It's a touching story, and one that Abbie initially finds difficult to believe. Until she 'remembers' how determined her husband is, and what a scientific breakthrough 'she' is.

As Abbie begins to gather more 'memories' she begins to really question her husbands motives for creating her, and his version of events surrounding her mysterious 'accident'. Can she trust the man who bought her to life, or should she be fearful that he is trying to end it?

The Perfect Wife is available from 8 August 2019.