Review - How It Was by Janet Ellis 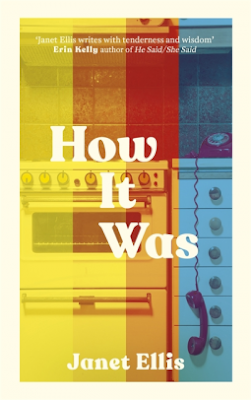 How It Was by Janet Ellis
Publisher: Two Roads Books
Release date: 8 August 2019
Back cover blurb: Marion Deacon sits by the hospital bed of her dying husband, Michael. Outwardly she is, as she says, an unremarkable old woman. She has long concealed her history - and her feelings - from the casual observer. But as she sits by Michael's bed, she's haunted by memories from almost forty years ago . . . Marion Deacon is a wife and mother, and not particularly good at being either. It's the 1970s and in her small village the Swinging 60s, the wave of feminism, the prospect of an exciting life, have all swerved past her. Reading her teenage daughter's diary, it seems that Sarah is on the threshold of getting everything her mother Marion was denied, and Marion cannot bear it - what she does next has terrible and heart-breaking consequences for the whole family. Janet Ellis writes of the exquisite pain of being in the wrong place at the wrong time, the complexity of family and a mother-daughter relationship that is as memorable as it is utterly believable.

How It Was is what I would describe as a 'complex' novel, in that it required (from me at least) a certain level of concentration that I perhaps wasn't expecting. Fans of Janet Ellis' previous novel, will still enjoy this novel. But it is very different as it is not historical fiction.

How It Was centres around Marion Deacon who is practically living in the hospital at the bed side of her dying husband. Through her memories we learn how they met, how they married, how their children arrived etc.

It should be idyllic, but Marion's life has been far from perfect, mostly by her own doing. I have to say that Marion isn't a particularly likeable character, and I found it difficult to warm to her, but then perhaps that it is the point...

Marion's daughter Sarah, is also pivotal to the story as it unfolds, as Marion begins to read her teenage diary behind her back, thinking that her daughter is growing up too fast, and becoming jealous of her life ahead of her.

Theirs is an interesting relationship, as are most of the relationships explored in this novel, many of which are dysfunctional. How It Was is a fascinating insight into these relationships and how a split second decision can change the course of your life forever.

How It Was is available from Amazon online.

Thank You to the publishers who approved my request via netgalley in exchange for an honest reveiw.
Newer Post Older Post Home