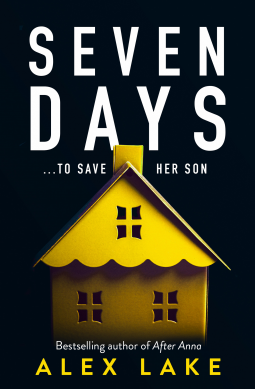 Back cover blurb: SEVEN DAYS UNTIL HER CHILD IS TAKEN. SEVEN DAYS TO SAVE HIM. In seven days, Maggie’s son, Max, turns three. But she’s not planning a party or buying presents or updating his baby book. She’s dreading it. Because in her world, third birthdays are the days on which the unthinkable happens… she loses her child. For the last twelve years Maggie has been imprisoned in a basement. Abducted aged fifteen, she gave birth to two sons before Max, and on their third birthdays her captor came and took them from her. She cannot let it happen again. But she has no idea how to stop it. And the clock is ticking…

Seven Days is another gripping novel from Alex Lake.

Maggie is a prisoner trapped in a stranger's basement. Captured as a teenager, and now in her twenties, Maggie longs for the world she hasn't seen for so long, but she knows that nothing will ever be the same for her again.

Life has changed beyond recognition for Maggie.

She is now counting down the days to her son Max's third birthday, but not so that they can celebrate (Maggie has nothing to give her son, even if she wanted to), but so she can ensure his safety.

Maggie has had children in captivity before, but when they have reached their third birthday they have been taken away from her, and Maggie has never seen them again.

She is determined that Max will not suffer the same fate.

We also see events from Maggie's family's perspective, from the harrowing days when she first went missing, to them trying to get on with their lives years later. Their struggles are as real and as painful as Maggie's.

Seven Days is a novel that will stay with you after it's final chapters, and I think the author's best so far!