[Blog tour] Review - The Name Beneath the Stone by Robert Newcome 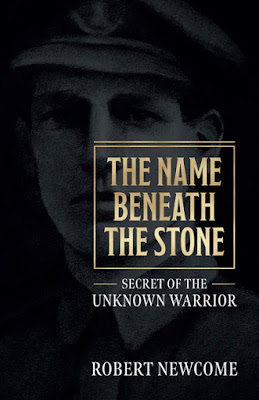 Back cover blurb: Three generations, one family, connected by an historic secret. 1917 – Private Daniel Dawkins fights at Messines Ridge and Passchendaele. He writes home to his true-love Joyce, but reveals little of his extreme bravery, his kindness, his loyalty to his comrades and the horrors they experience on the Western Front. 1920 – Captain Peter Harding is tasked with a secret mission to assist in the selection of a body dug up from the battlefields of Flanders to be buried in Westminster Abbey as the 'Unknown Warrior'. Events take place on that expedition that come to haunt him for the rest of his life. 2011 – Sarah Harding discovers Daniel’s letters and Peter’s diaries. Together with historian James Marchant she pieces together the hidden truth behind the Tomb of the Unknown Warrior and must decide what to do with it. Values are challenged and characters are tested in this gripping novel which asks ‘what if the identity of the Unknown Soldier was discovered - and should that secret ever be revealed?’

1920 - The novel opens with the ceremony to intern the 'Unknown Warrior' to Westminster Abbey. It's significance as the first 'tomb of the unknown soldier' is not yet realised, and those involved, although aware they are doing something important, do not realise just how important it will become.

2011 - Sarah Harding is going through her dying Father's things when she comes across some letters addressed to her late Grandmother Joyce from a man named Daniel. But Daniel is not the name of her late Grandfather.

Sarah has known for some time that Peter Harding is not her paternal Grandfather, but her Father has never mentioned the name Daniel to her, until he is on his death bed and can barely speak. He refers to the 'Unknown Soldier' and this raises many more questions for Sarah than just simply 'who is Daniel?'.

1917 - Daniel Dawkins is on the front line, trying to keep his comrades going in their darkest times with his brilliant wit and sparkling personality. But in truth he is desperately missing home and his beloved school sweetheart Joyce.

Three different times periods, three very different characters, each of them dealing with their own battles in difficult times. I don’t want to say too much more and give anything away, so I’ll leave it there.

The Name Beneath the Stone is an incredibly well research and beautifully written novel. It holds important historical significance and is highly recommended.

The Name Beneath the Stone is available now via Amazon online and all good retailers.
Thank You to Bookollective who sent me a copy of this novel in exchange for an honest review. 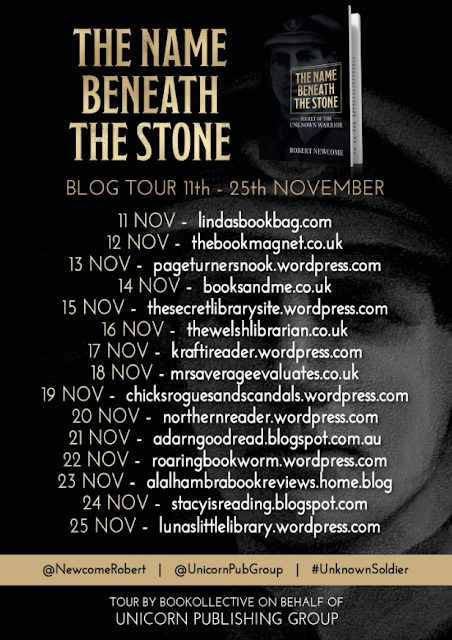