Review - A View Across The Rooftops by Suzanne Kelman 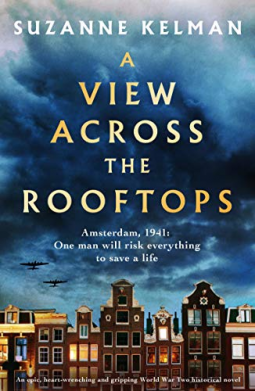 A View Across The Rooftops by Suzanne Kelman
Publisher: Bookouture
Release date: 25 October 2019
Back cover blurb: Would you risk your life to save just one person? An incredible story of love, hope and friendship, and a testament to humanity and courage in history’s darkest days. 1941, Nazi-occupied Amsterdam. Professor Josef Held has never recovered from the loss of his beloved wife – and has no intention of ever letting anyone new into his quiet, safe world. It is a world where the clock ticks steadily in his mathematics classroom, where every equation has a solution. Every day he walks the same route home, past his neighbour Mrs Epstein’s, to a home inhabited only by him and a cat he refuses to even name. But then the Nazis come for the Jews – and Mrs Epstein is killed. And Josef, in an impulsive act of courage, offers his student Michael Blum a place to hide. Michael is everything Josef is not: spontaneous, poetic, and unafraid to love. Even though his passionate relationship with a Dutch girl called Elke strictly is forbidden by the Nazis – for he is Jewish, and she is not. Desperate to give Michael and Elke’s love a chance to survive, Josef gives Michael refuge in his attic: an act of bravery and resistance that will change both of their lives. But as the dark days of war continue, with danger and betrayal at every turn, no-one can be trusted, and no one is safe. If Michael is going to get back to the woman he loves, it is down to Josef – to find the hero inside himself, and do whatever it takes to keep Michael alive.

Regular readers of my blog will know that historical novels, particularly those set in the WW2 era are my favourite. A View Across...is certainly no different. Set in Nazi occupied Amsterdam, it offers a different perspective from the usual German/British set novels of the time.

Professor Josef Held is the most unlikely person to break the law, or be an unwitting part of the resistance. But he is a good man, and understands that those occupying his beloved country are the ones in the wrong.

Consequently when a former student of his almost literally lands on his doorstep, Josef cannot help but take him in. He understands that by hiding him he is placing them both in extreme danger, but after the Nazi's captured and murdered his neighbour, he cannot stand by and let them win.

Meanwhile Josef's niece is ignorant to the terror that the Nazi's are causing and believes that the occupation is a good thing. She is in love with a Nazi officer, and this alone puts Josef in danger. Of course, she knows nothing of his deception, but Josef cannot afford to find out whether family loyalty comes before loyalty to a cause.

As the war rages on, our characters become more vulnerable and we wonder if any of them will survive the war. A View.. is a beautifully written novel about friendship, courage, loyalty, love and loss, and I can't wait to read another by this author.

A View Across The Rooftops is available now via Amazon online and all good book shops.

Thank You the publishers who approved my request via netgalley in exchange for an honest review.