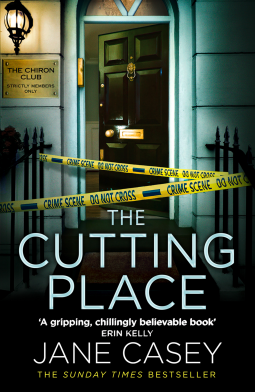 The Cutting Place by Jane Casey

Back cover blurb: You've got to be in the club to know the truth. Everyone's heard the rumours about elite gentlemen's clubs, where the champagne flows freely, the parties are the height of decadence . . . and the secrets are darker than you could possibly imagine. DS Maeve Kerrigan finds herself in an unfamiliar world of wealth, luxury and ruthless behaviour when she investigates the murder of a young journalist, Paige Hargreaves. Paige was working on a story about the Chiron Club, a private society for the richest and most privileged men in London. Then she disappeared. It's clear to Maeve that the members have many secrets. But Maeve is hiding secrets of her own – even from her partner DI Josh Derwent. Will she uncover the truth about Paige’s death? Or will time run out for Maeve first?

The Cutting Place I believe is the second novel I've read by Jane Casey, though this is the 9th in her Maeve Kerrigan series. It can certainly be read as a stand alone novel, as I myself have not read all books in the series. (Though I probably should try to at some point as I love Maeve's character!)

When Paige Hargreaves, a young investigative journalist is found dismembered in the Thames, Kerrigan is quickly sent to investigate.

Paige was investigating the Chiron Club, an exclusive members only club for wealthy, privileged men in London, suspected of conducting highly illegal activities. But the Chiron had made it difficult for outsiders of any description to gain access to their world, not least investigative journalists.

Maeve and her colleagues must gain access to Chiron Club in order to determine if any of its members played a part in Paige's death.

Were they trying to keep her quiet because they didn't want the club to be bought into disrepute?

Or is there something even more sinister being protected?

The Cutting Place is a brilliant written fast paced thriller, full of twists and turns to keep even the most prolific crime reader guessing, and I can't read to read the next in this series!

The Cutting Place is available now via Amazon online and all good shops.