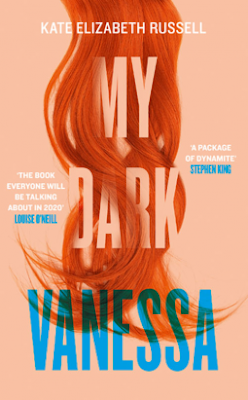 My Dark Vanessa by Kate Elizabeth Russell
Publisher: 4th Estate
Release date: 10 March 2020
Back cover blurb: ALL HE DID WAS FALL IN LOVE WITH ME AND THE WORLD TURNED HIM INTO A MONSTER. Vanessa Wye was fifteen-years-old when she first had sex with her English teacher. She is now thirty-two and in the storm of allegations against powerful men in 2017, the teacher, Jacob Strane, has just been accused of sexual abuse by another former student. Vanessa is horrified by this news, because she is quite certain that the relationship she had with Strane wasn't abuse. It was love. She's sure of that. Forced to rethink her past, to revisit everything that happened, Vanessa has to redefine the great love story of her life – her great sexual awakening – as rape. Now she must deal with the possibility that she might be a victim, and just one of many. Nuanced, uncomfortable, bold and powerful, My Dark Vanessa goes straight to the heart of some of the most complex issues our age.

Vanessa Wye is a fifteen year old student at a prestigious prep school when she firsts sets eyes on her new English teacher Jacob Strane.

Strane is Forty Five, a whole thirty years difference in age to Vanessa, and yet he still wants her, and she (she believes) is strangely drawn to him also.

When Vanessa enrols in an after hours English club to improve her overall school profile, she does so with an ulterior motive, of getting closer to Strane.

At first Strane is subtle in his pursuit of Vanessa, pointing out paragraphs in books for her, bringing her his 'favourite' texts to read, and then he becomes bolder, placing a hand on her knee when she's sat at his desk, telling her he'd like to kiss her goodnight after a school Halloween party.

He knows that he has gotten inside Vanessa's head, Vanessa of course thinks that she is the one pursuing Strane, that he cannot possibly be interested in her, an ordinary fifteen year old girl with no friends.

Of course, that is precisely why he is interested in her.

Seventeen years later and Vanessa is working in a hotel when she hears that Strane is being accused of sexual abuse by another former student at the school Vanessa went to. Vanessa cannot believe what she's hearing. Strane wouldn't hurt anyone.

Their relationship was consensual, and loving. She is sure of that.

As more allegations come to the surface, Vanessa is forced to rethink everything about the past seventeen years of her life, and she may not like what she discovers.

My Dark Vanessa is a brilliant, hard hitting and thought provoking novel that will unsettle the reader, but must be read.


My Dark Vaness is available via Amazon online and all good shops.