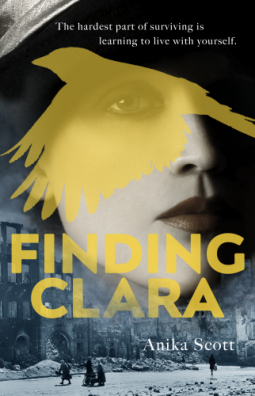 Back cover blurb: 1946. The ruins of Essen, Germany. A place that can't quite believe the Second World War has been lost. There's Clara. Once a wartime icon and heiress to the Falkenberg iron works, she now finds herself on the run from the Allied authorities, accused by the zealous Allied occupiers of complicity in her father's war crimes. There's Jakob. A charming black marketeer, badly wounded in the war but determined to help what's left of his family survive the peace. There's Willy. A teenage boy diligently guarding a mine full of Wehrmacht supplies, his only friend a canary named Gertrud. Convinced the war isn’t over, he refuses to surrender his post. When Clara returns to her hometown expecting to find her best friend, she finds everything she once knew in ruins. But in war-ravaged Germany, it’s not just the buildings that are scarred: everyone is changed, everyone lives in the wreckage of their own past. To survive, Clara must hide who she is. But to live, she must face up to the truth of what she’s done.

1946 Germany is trying to deal with the aftermath of WWII.

When Fraulein Muller accepts the proposal of Marriage from her Doctor boyfriend, she is shocked to discover not only that he knows of her past (or presumes to), but also that he worked in a death camp during the war.

His casual acceptance of her presumed past, and his admission prompts her to flee to her her hometown of Essen, in search of her best friend and family.

Fraulein Muller is in fact not a Muller at all, in fact she is Clara Falkenburg, heiress to the Falkenburg Iron Works and former poster girl for the Reich.

Clara is on the run, a wanted woman by the Allied authorities.

Her acceptance of her Doctor's proposal could have meant a new life, until she realised his part in the war.

Accused of her own complicity in her Father's war crimes, part of Clara wants to be captured so that she can prove her innocence.

Her return to Essen may not lead her on the path she is expecting, but it is a path that she must take in order to move on with her life in the new Germany.

Finding Clara is available now via Amazon online and all good book shops.