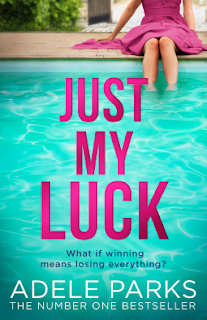 Any regular readers of my blog will know that I am a massive Adele Parks fan, so today was always going to be exciting for me, as her latest novel Just My Luck is published.

However there is an additional reason for my excitement today, and I am delighted to be hosting a quick Q&A on my blog in honour of Just My Luck's publication, Adele's 20th novel in 20 years!!!

Just My Luck is available to buy today via Amazon online and all good book shops.

1. The last twenty years has flown by, did you ever think when Playing Away was published that you would still be writing and publishing twenty years later?

Honestly, I barely thought a month ahead in those days! I did think, ‘Oh finally, I am an author’ as that was what I had always wanted to be and I was already 30. I had tried a few different career avenues by then, in retail, advertising and as a management consultant. I did hope that I’d continue writing from then on.

2. It’s a massive achievement. Did you ever believe that you would publish twenty books in twenty years?

I don’t think I expected to write a book a year for 20 years and for them all to be bestsellers. That seems unbelievable to me, even in retrospect! I just kept putting one foot in front of another and asking, ‘What’s next?’ My work is not just work, it is a vocation; I love being a writer so it hasn’t such an effort to write this many! I’ve been so incredibly fortunate to have enjoyed the support of readers, publishers, bloggers and reviewers for this length of time.

3. If you could pick a career defining moment from the last twenty years what would it be, and why?

I guess the moment an agent accepted the first book I wrote (Playing Away), 21 years ago, I knew I was off! I found him via a book called ‘The Writers’ and Artists’ handbook’ which lists agents and publishing houses. I didn’t know anyone in publishing or how to go about getting started. I basically cold-called by sending him an unsolicited manuscript. I still remember the moment he called to say he had excepted it. My other career defining moment was when Lies Lies Lies hit the number 1 spot in the Times Best Sellers List. I’d had the number of number 1 position in other charts (Amazon, the Independent etc.) but The Times felt incredibly special. It’s basically the real deal top spot!

4. If you ask one question to any of your readers that have been with you for the last 20 years, what would you ask?

I usually want to know which is their favourite novel of mine. I’d also want to thank them enormously for their support and loyalty.

5. Is there a question that most authors are asked all the time that you’ve never been asked which has surprised you?

I don’t think so! People are extremely interested in the careers of writers and that is flattering. I always try to answer anything and everything as sincerely as possible.

A huge thank you to Adele and Sophie Calder at Harper Collins for taking the time out to answer my questions and arrange the Q&A.