Review - The Book of Lost Friends by Lisa Wingate 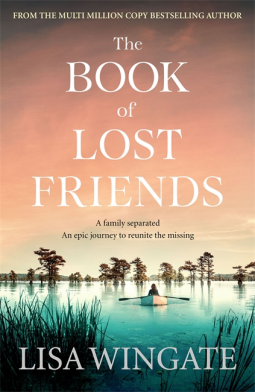 The Book of Lost Friends by Lisa Wingate

Release date: 7 April 2020
Back cover blurb: Louisiana, 1875: In the tumultuous aftermath of Reconstruction, three young women set off as unwilling companions on a perilous quest. For heiresses Lavinia and Juneau Jane, the journey is one of inheritance and financial desperation, but for Hannie, torn from her mother and siblings before slavery's end, the pilgrimage westward reignites an agonizing question. Could her long-lost family still be out there? Louisiana, 1987: Arriving in Augustine, Louisiana, first-year teacher Benedetta Silva finds herself teaching students whose poverty-stricken lives she can scarcely comprehend. The town is impossibly set in its ways, suspicious of new ideas and new people. But amid the gnarled live oaks and ancient plantation homes lies the century-old history of three young women, a long-ago journey, and a hidden book that could change everything.

Louisiana 1875, Hannie has just turned Eighteen, having been left alone on the Gossett plantation,  her entire family exchanged to other plantation owners for money. She accompanies the ladies of the house, Lavinia and Juneau Jane on a journey where they begin compiling 'The Book of Lost Friends'.

Louisiana 1987, Benedetta Silva is a new teacher at a poverty ridden school. Her attempts at teaching her class are not what she was expecting. The kids are unruly and the only condition is that they be kept in the classroom. They are mostly distracted by hunger, as most are starving.

She is about to give up when she discovers that the abandoned house near her own houses a huge library. She decides to build a library for her classroom and try and engage the kids through reading.

However, she soon discovers that the old house harbours some dark secrets. Her discovery doesn't lead her to shut the door on the place though, as it would with many. Instead, it inspires a class project that the previously disinterested kids quickly become absorbed in.

But will the school board and other residents of the town allow a painful and ugly part of their history to be bought back to life?

Hope runs strongly through this novel, and the belief that no matter how tough things are, they will get better. Something that we can all identify strongly with at the moment.


The Book of Lost Friends is available now Amazon online and all good book shops.